Syrian civilians and fighters from the opposition getting ready to board buses during their eviction from the city of Irbeen in eastern Ghouta in the suburbs of Damascus on March 25, 2018, following a deal with the Syrian regime. Photo by Abdul Munim Issa. Used with permission.

The Syrian regime evicted residents of eastern Ghouta, forcibly displaced them from their towns and villages and sent in green buses towards rural Aleppo and Idlib in northern Syria, following a 45-days military offensive that claimed the lives of 1,650 people and wounded thousands more.

The evictions took place after a deal between the opposition and the Syrian regime, allowing the Syrian regime and its allies to seize homes and whole towns, sometimes even detaining those who remained.

The displaced masses arrived in the northern region tired, broken and burdened by years of siege and unbearable memories. They had reached the end of the road — or, more accurately — they arrived at the beginning of another journey. It was the end of daily tragedy from the siege and shelling, and the beginning of the tragedy of displacement and the difficulties of starting over.

Most of the displaced populations settled in various towns throughout rural Aleppo and Idlib. Many realized they were at a crossroad, with two main routes to choose from that would determine their future.

In the north, many questions swarm the minds of newly arrived populations from eastern Ghouta: “Will we be subjected again to a siege and shelling? Will we be living in worse conditions than those we’ve just survived? Shall we leave to Turkey where we know nothing?”

People are confused. They could either chose to stay in northern Syria despite the tough conditions and unclear future, or they could decide to cross the border and seek refuge in Turkish towns — either settling there or starting a journey toward Europe.

Displaced Syrians do not speak the Turkish language. They must learn it to seek employment, settle and lead a normal life. But this requires time and money that nearly all lack. Most don’t even have the money needed to pay smugglers who could transfer them to the other side of the border — that is, if they dismiss the risks of dealing with the deception and extremely dangerous risk of crossing with them.

Samer, 29, married with one daughter, describes his family’s dilemma:

I don’t feel comfortable leaving Syria. I’m not comfortable staying either. I hope God avenges us from those who flipped our lives upside down and erased our future.

Mohammed, 25, cannot consider leaving to Turkey as he is the only provider for his family. Smuggling them all to Turkey would cost him thousands of dollars which he doesn’t have and so he stopped thinking about it. Living in Turkey is expensive, and as the sole breadwinner, he would not be able to provide their basic needs.

Shadi, 24, a field reporter from Ghouta, says he has to stay in Syria to serve his cause and amplify the stories of his peoples’ struggles and small achievements. He wants the world to know that people never die — even when uprooted from their homeland.

Upon arrival in northern Syria, some families decide to stay within the Syrian borders and live in any one of the northern towns.

Nazir, 26, married with one daughter, resumed his work with the Guardians of Childhood, a civil society organization he used to work for in his hometown of Douma, just two weeks after his arrival.  He wanted to stay in Syria to help displaced children without access to education, hoping he can rescue them from ignorance and destruction.

Niveen, 38, a mother of two and an activist, refuses to leave as well:

If we all leave Syria who will help the women and children left behind?

Niveen does not want to seek refuge in Turkey because she doesn’t want to be labeled a refugee. She believes she has a mission to fulfill in Syria, and as long as staying is an option, she will stay on Syrian soil, just as she did seven years ago when the conflict began. She doesn’t want to be forced to leave and waste years of her life outside Syria.

For others, the decision to stay in Syria was based on their fear of the unknown.

Nuha, 24, says that it is very difficult for her to live in Turkey where nobody understands her except through hand gestures or translation apps. She says that she prefers to stay in Syria because staying means greater chances of returning home.

Um Abdul Rahman, 49, mother of seven children, was persuaded by her children to stay because they did not want to lose their dignity living as refugees in another country.

Mahmoud, 34, married with four children, ensures that his children are attending school again. He wants them to get an education because it guarantees a good future. He wishes he could leverage his own qualifications, a bachelor in civil engineering, but this would mean going to Turkey. He could not ignore his conscience and leave his countrypeople behind, so he decided to remain in Syria, leaving refuge in Turkey as the last option, when all other hope is lost.

Ghouta’s displaced populations often convene to discuss their options. They consult their friends and family because they don’t want their children to grow up away from home; they also don’t want them to grow up in a war-torn place. They want to forget the pain and suffering and start over, but at the same time, they don’t wish to leave their country after having survived seven years of hell.

Seeking refuge beyond the border

For many, seeking refuge in Turkey or other parts of the EU is a necessary choice, having lost the ability to tolerate living in a war zone. They want to escape life-sucking sieges and live a normal life.

Moa’yad, 24, wants to hear the birds chirping again; he wants to hear music and his neighbors’ loud noises. He says he can no longer take the sound of a single bomb — not even a single gunshot.

Rahaf, 21, wants to flee the bombing, fear and futile anticipation of peace conferences that lead nowhere. She wants to escape warlords trading people’s lives. She says she cannot bear the idea of living under another potential siege now that she managed to leave Ghouta.

Moa’yad is afraid of settling up north because he is unsure of what awaits Idlib — its future could be worse than eastern Ghouta’s scenario. He wants to go to Turkey and live with his brother and work with him at a sewing factory until he learns Turkish and goes back to school.

Staying in Syria is not an option for Imad, 22, either.

He doesn’t want to live in a place where the possibility of bombing always looms — from Russians or Iranians on the one hand or the unfair rule of various factions on the other. Imad also realizes it’s impossible to finish his studies in the north because of the instability and the fact his qualifications are not recognized outside of northern Syria. For him, Turkey is the best option.

Residents of eastern Ghouta behold their vague future in fear as thousands of questions play in their heads. Yet, many fail to find a single helpful answer, since going home to eastern Ghouta is not an option — at least not yet. 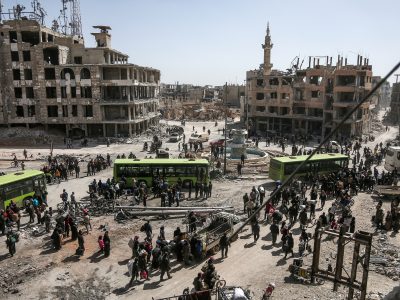