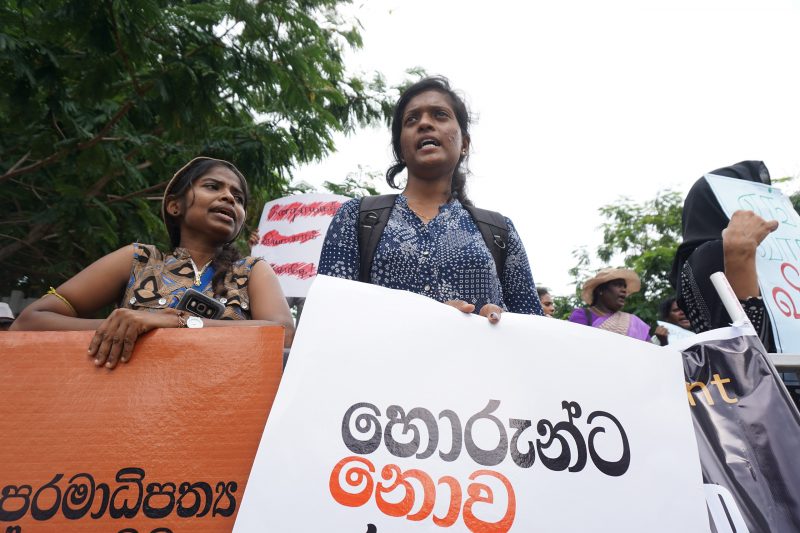 This post originally appeared on Groundviews, an award-winning citizen journalism website in Sri Lanka. An edited version is published below as part of a content-sharing agreement with Global Voices.

Sri Lanka has been embroiled in a political crisis since October 26 when president Maithripala Sirisena removed Prime Minister Ranil Wickremesinghe – replacing him with former president Mahinda Rajapaksa. This has led to a power struggle between the newly appointed PM and the recently ousted PM who both believe in the legitimacy of their position. Thousands of protesters have taken to the streets of the capital Colombo to question the constitutional legitimacy of the president’s decision and demand the parliament be reconvened to settle the matter. Bowing to pressure, President Sirisena has promised to reconvene the parliament on November 7.

On November 4, 2018, a group of people gathered at the Liberty roundabout in the Kollupitiya neighborhood of the Sri Lankan capital Colombo.

For some, it was their fifth day of standing in protest. Following news that President Maithripala Sirisena and the United People’s Freedom Alliance had stepped down from the coalition Government, a group of citizens decided to meet at the roundabout every day, from 4:30 to 6:30 pm, until Parliament was convened. On the first day, the protest coincided with a larger rally organised by Ranil Wickremesinghe-led United National Party (UNP) held nearby – but many of those who attended the rally on that day were quick to say that they were not attending to support the UNP.

On October 30, a tweet by Lisa Fuller featuring one of the posters held by a protester went viral. It read, “I’m not here for Ranil – I’m here for democracy”.

The poster appeared to encapsulate the sentiments of many of those gathered at the Liberty roundabout on October 30 and every day after.

Over the past few days, Groundviews documented those who attended the citizen protest. Those attending included young people who had never attended a protest before, senior citizens, activists and members of civil society. On November 4, there were participants from Jaffna, Mannar, Batticaloa and Kandy as well as from Colombo. For some, it was their first time at a protest. Others had seen corruption continue on for decades (the oldest participant was 92 years old). Members from the corporate sector stood shoulder-to-shoulder with activists from Jaffna and Batticaloa, who were flanked by those in the theatre community.

Corruption was a recurring topic, given revelations from UNP MP Ruwan Wijewardene about sums of money being offered for Parliamentarians to switch allegiances.

On October 30 and afterward, we asked those who attended one simple question – “What made you decide to participate?”

Over the past few days, Groundviews documented those who attended the citizen protest.

This is what they had to say: 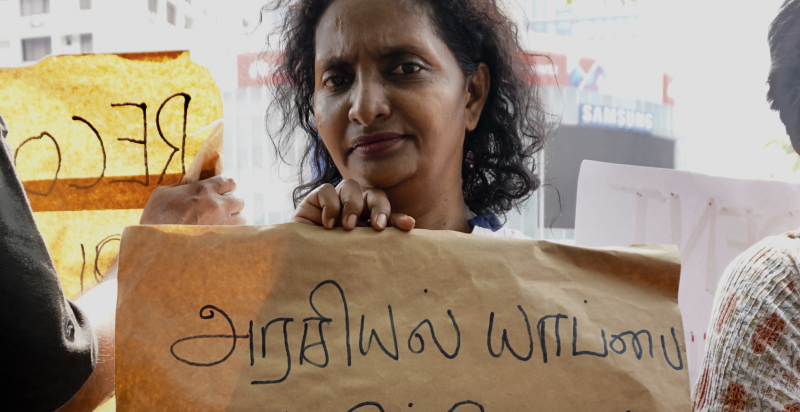 “As a mother, as a grandmother, I want to see democracy restored. I’m not against any person or any party but as a citizen of Sri Lanka. Nothing like this has ever happened before” – Diordre Moraes 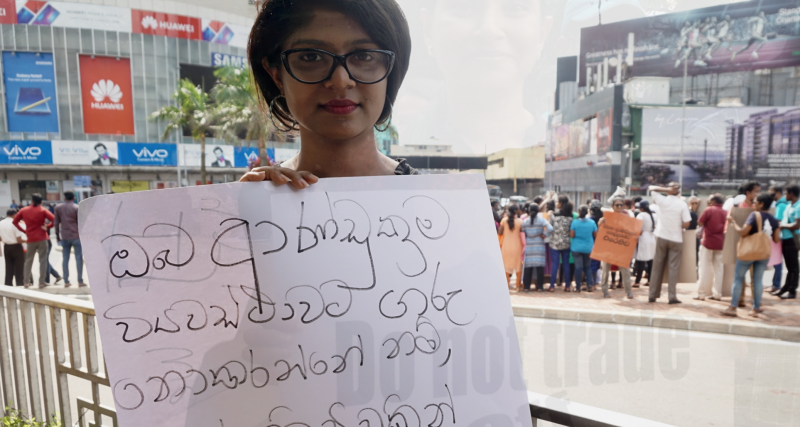 “I feel young people should take political issues more seriously. When youth engage with politics they only look at statements from the President or Prime Minister. We don’t look at deeper issues. I’m hoping to influence young people to come.” Neluni Tillekeratne

Our Malaiyaha Tamil community, those who work in tea estates, voted for President Sirisena hoping he would reform society. However, what he did sets us back 100 years.’ Nadesan Suresh, from Badulla. 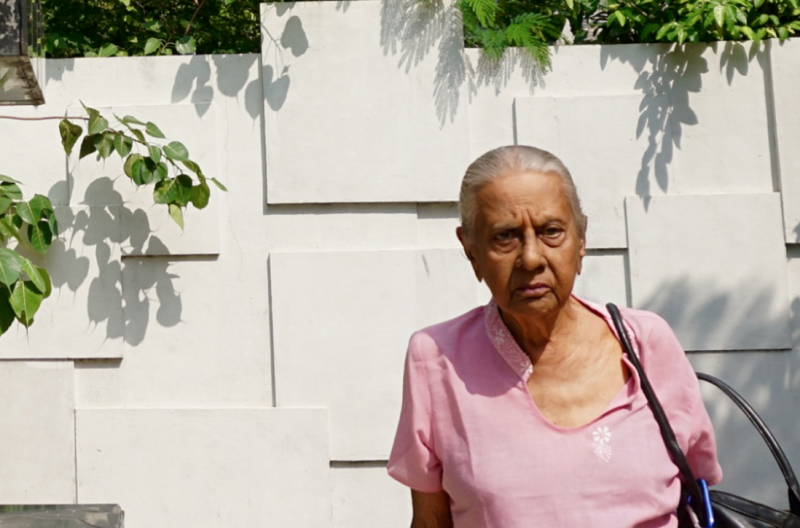 “Though I’m 92 years old, I feel I must make a stand for democracy. Over the years I’ve seen the steady deterioration of political life. Every party has used corrupt practices for short term gains.This has to change.” Sarojini Kadirgamar

“I’m here for democracy. If an MP choose to jump to another party they should lose their seat in Parliament. I’m not here for any party.” Leisha Lawrence (far right)

“We vote in a particular way for who we want. That doesn’t give the President the right to do what he wants, because he doesn’t get on with a particular person.” Mihiri de Silva (second from right)

“My vote is not for sale. This is not right!” Sepali de Silva (second from left) 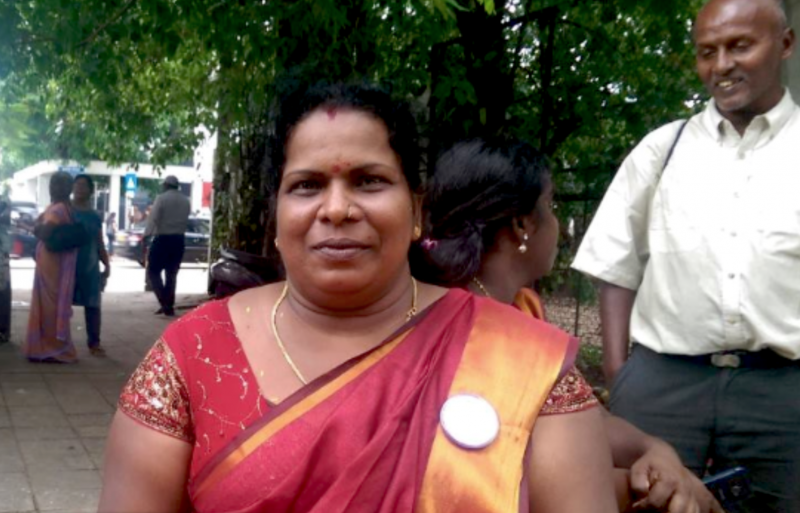 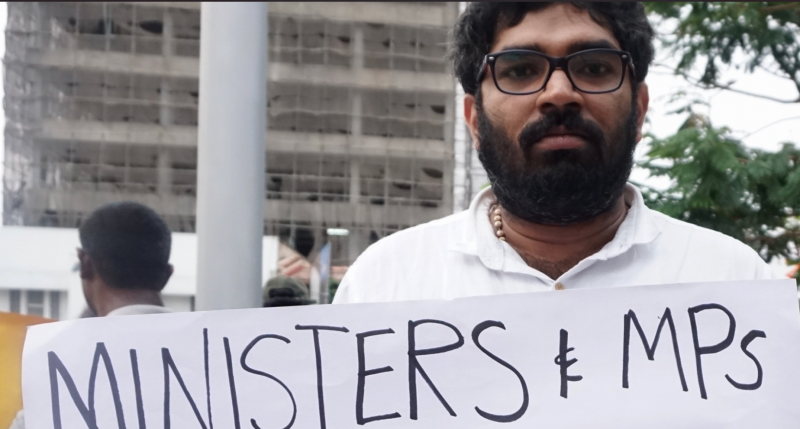 “The decisions being made now don’t include the public opinion. They are just taking their own decisions. There is a way to do things.” Adrian Roshan Fernando. 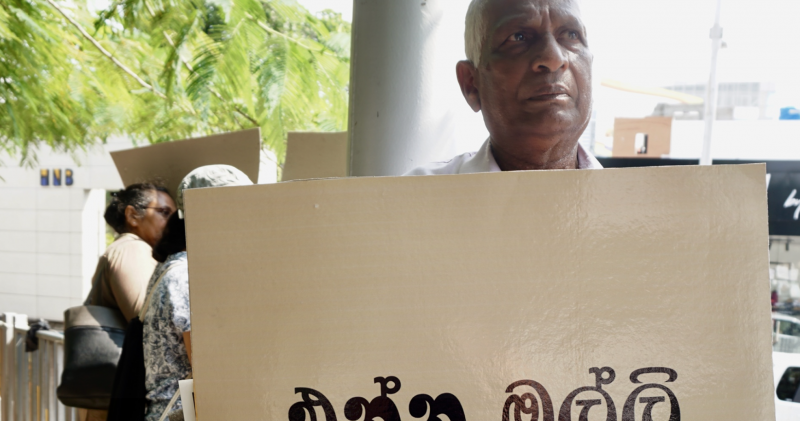 “This is not good for the country. We’re doing this for the next generation, for the future of this country.” Piyathilaka Ranaweera 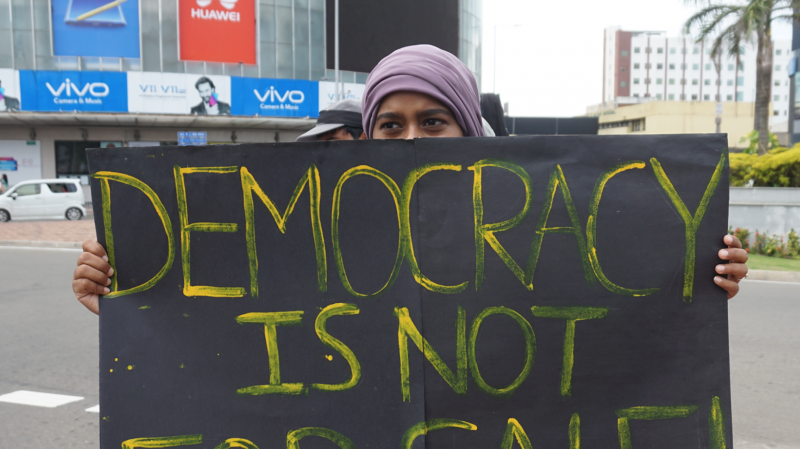 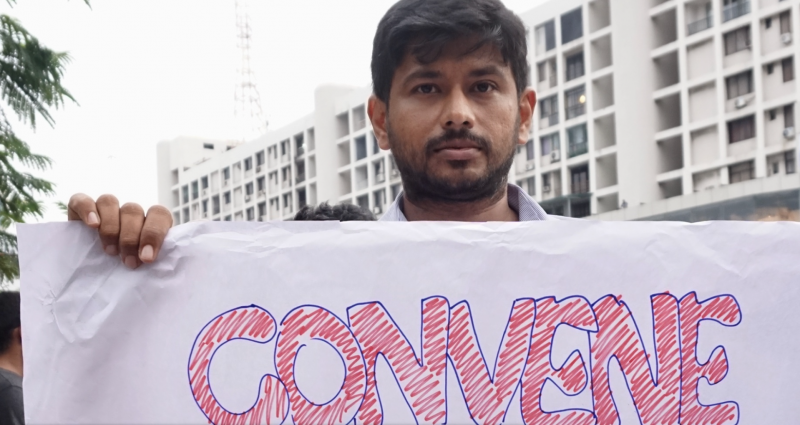 Rather than saying “I am Prime Minister” come to Parliament now and show that you have the majority. Govern the country. Don’t waste our time!” Abdul Kalam Azad.

As evening fell, the electricity at the Liberty roundabout remained switched off. Later on, Mayor of Colombo Rosy Senanayake tweeted that this was “an act of sabotage”.

This has been brought to my notice and it was an act of sabotage. We will ensure the lights are switched on tomorrow.#RosySenanayake #Colombo #SriLanka #lka https://t.co/Vq4DPWnlz5

Undeterred, the protesters used the light of their mobile phones and continued chanting. 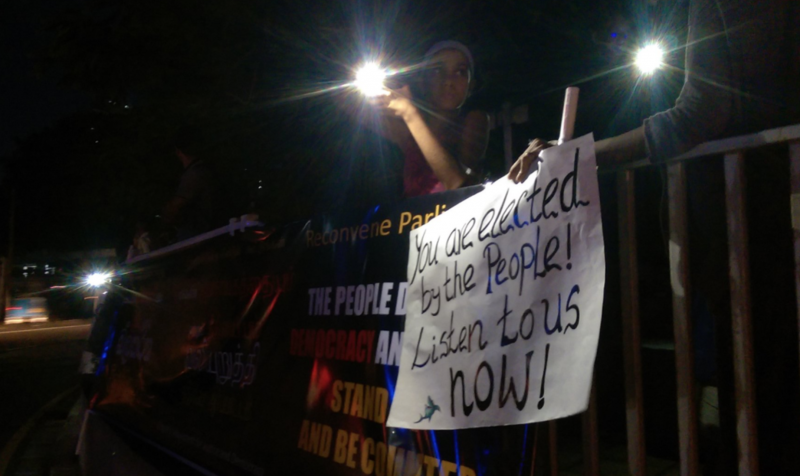 Eventually, at 7 pm, the protest came to an end – to be resumed the next day, and the day after that, until Parliament reconvenes. 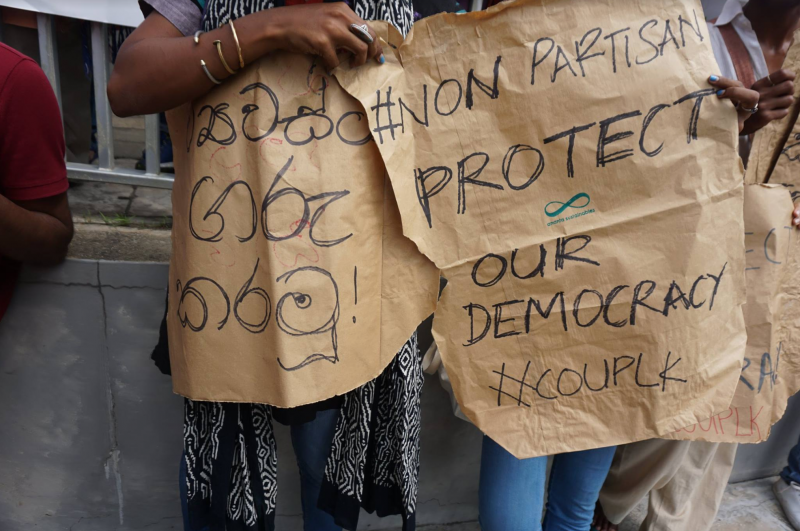 You can read the full Photo essay here. You can also follow along with the protest on Twitter, and from multiple perspectives, here. 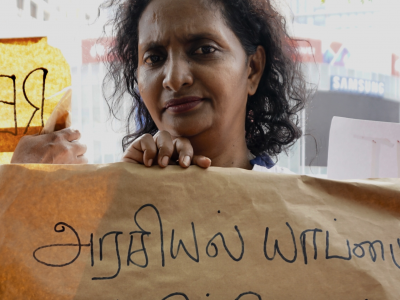