Listen to this article
Some 5,000 people seeking refuge in a hospital in Central African Republic (CAR) risk being attacked by armed groups, a medical charity said Tuesday, amid ongoing clashes.
About 10,000 people ran to the hospital in Batangafo, some 400 km (250 miles) north of the capital Bangui, last week, after armed groups looted and burned thousands of homes, three camps hosting 27,000 displaced and a market in the city.
Half of those camped out in the hospital grounds have since joined others hiding in the bush or other villages, Omar Ahmed Abenza, head of mission for Medecins Sans Frontieres (MSF) in CAR, told Reuters from Bangui.
“People don’t feel safe anywhere in the city,” he said, adding that MSF staff working in the town regularly heard gunshots and grenades in and around Batangafo.
CAR has faced near-constant armed conflict since 2013, when a mostly Muslim Seleka rebel coalition overthrew then-president Francois Bozize, prompting reprisals from Christian and animist “anti-balaka” militias.
Despite electing a new leader in 2016, the country has been mired in tit-for-tat inter-communal violence and political instability.
CAR is one of the world’s most dangerous countries for humanitarian workers, with MSF suffering an average of three attacks a month on its facilities, vehicles and staff last year.
Abenza said the hospital cannot guarantee the safety of the thousands of people sleeping on the grounds in temporary shelters hastily built from carpets, clothing and other belongings.
“For us, it’s almost impossible to control who goes in and out. We can’t deny access to the population,” he said. “Our security is basically ensured through the constant conversations with the leaders of the armed groups.”
The situation is also dire in Bambari, in central CAR, where there were also clashes last week, with many people “too scared to leave their homes to seek medical treatment,” he said.
The World Food Program (WFP) said Tuesday that 1.9 million people in CAR do not have enough to eat — the highest figure since 2014, when the country was rocked by widespread sectarian violence.
“Fresh, ever more harrowing, reports continue to emerge suggesting only continuing exacerbation of an already profoundly grave situation,” WFP spokesman Herve Verhoosel said.
“Prompt international and regional attention and action are urgently needed to ward off a human tragedy.” 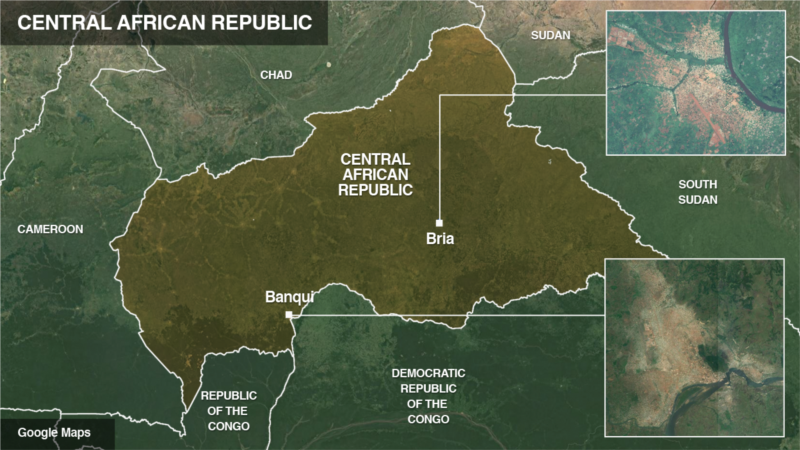