U.S. Senator Bernie Sanders unveiled his updated “Medicare for all” plan Wednesday with several rival Democratic presidential hopefuls jumping onboard, spotlighting his 2020 campaign call for a national health insurance program.
The idealistic legislation has little to no chance of passage in a divided Congress and in the run-up to next year’s election. But Sanders, a front-runner for the Democratic nomination, is laying down a prominent policy marker at the outset of the race.
“The American people want — and we are going to deliver — a Medicare for all, single-payer system,” Sanders said at a Capitol Hill press conference.
His plan would convert public and private insurers into a government-run system which the senator said would hit back at the “greed and profiteering” of health providers and the insurance industry.
“Together we are going to end the international embarrassment of the United States of America, our great country, being the only major nation on Earth not to guarantee health care to all as a right,” he said.
“This is a struggle for the heart and soul of who we are as American people.”
Sanders said the plan could save $500 billion annually by eliminating the wasteful bureaucracy of thousands of health care plans.
But critics, including some Democrats, warn it could end up costing trillions of dollars over the coming decade.
Sanders was reintroducing a version of legislation he put forward in 2017, with support from several fellow senators who are now in the presidential race.
The current bill’s co-sponsors include White House hopefuls Cory Booker, Kirsten Gillibrand, Kamala Harris and Elizabeth Warren.
“It’s what our country needs,” Gillibrand said of universal health care. “This has to become the next social safety net.”
‘Total government takeover’
The messaging comes as President Donald Trump seeks to dismantle the Affordable Care Act that became law under predecessor Barack Obama, and as the number of uninsured Americans soared by seven million people since 2017, to roughly 34 million.
Obamacare opponents argue that costs have risen for millions of enrollees, but supporters say that has occurred largely because of Republican and Trump administration efforts to chip away at the law’s provisions.
The White House said Americans deserve relief from the “empty promises” of Obamacare, but also knocked the Sanders plan.
“Self-proclaimed socialist Senator Bernie Sanders is proposing a total government takeover of health care that would actually hurt seniors, eliminate private health insurance for 180 million Americans, and cripple our economy and future generations with unprecedented debt,” said White House press secretary Sarah Sanders.
The Medicare For All Act faces an uphill battle in Congress, where the top Democrat, House Speaker Nancy Pelosi, has voiced skepticism about associated costs.
“I’m agnostic. Show me how you think you can get there,” she told The Washington Post last week.
“Right now, it’s a $30 trillion price tag,” she added. “What do people get for that in terms of care, and what do they pay for that along the way?” 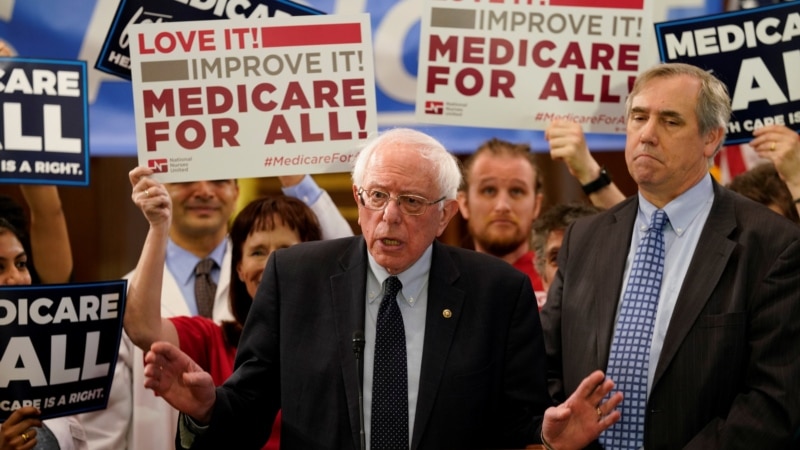