U.S. Vice President Mike Pence called on the United Nations on Wednesday to “stand up for democracy” and recognize Venezuelan opposition leader Juan Guaido as that country’s legitimate leader.
“While other international bodies have acted, the United Nations and this Security Council have refused to act,” Pence told a meeting of the U.N. Security Council called by the United States.
“But now that nations across this hemisphere have spoken, the time has come for the United Nations to recognize interim president Juan Guaido as the legitimate president of Venezuela and seat his representative in this body,” Pence added. “This body should revoke the credentials of Venezuela’s representative to the United Nations, recognize interim president Juan Guaido, and seat the representative of the free Venezuelan government in this body without delay.”
Pence said the United States is working on a U.N. resolution to recognize the legitimacy of the government of Guaido and urged the international community to support it.
“Stand with the Venezuelan people as they rise up to restore freedom, democracy and libertad to their nation,” he said, using the Spanish word for freedom.
However, it was not immediately clear whether the U.S. is seeking to accomplish this in the Security Council — where Russia would certainly veto any such measure — or in the General Assembly, where all nations have a vote.
Under U.N. procedures, government delegations are accredited through the organization’s Credentials Committee. If a majority of the committee’s nine members vote to revoke the credentials of the delegation of President Nicolas Maduro, then the matter would move to the General Assembly where a simple majority vote would be required to affirm their decision.
So far, 54 nations have joined Washington in recognizing Guaido’s government after he declared himself interim president earlier this year. The U.N. has 193 member states, and it is not clear how many would support such a resolution. Many states are hesitant to take measures interfering in the internal affairs of other countries, lest they find themselves on the receiving end of such measures in the future.
Pence reiterated that the United States would continue to exert diplomatic and economic pressure to bring about a peaceful transition to democracy in Venezuela, “but all options are on the table.”
He also announced an additional $60 million in humanitarian assistance to support Venezuelans and the host communities that have taken them in. That is in addition to the $200 million the U.S. has already allocated in aid. 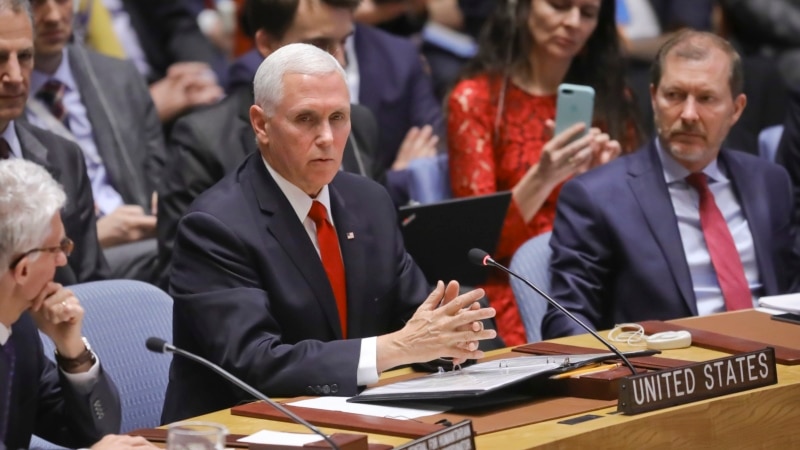