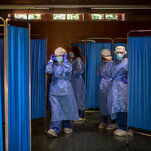 QF Preview—With the Big 3 away, the time is now for the ATP’s Next Gen  Tennis Magazine

The hasty departures come after the arrest last month for undetermined reasons of an Australian business journalist working for the Chinese state-run English-language channel CGTN, Cheng Lei. This arrest greatly strained relations between Beijing and Canberra.

According to ABC, Birtles was advised last week to leave the country by the Australian Foreign Office. But shortly before his return to Australia, scheduled for last Thursday, seven Chinese police officers came to his home in the middle of the night and informed him that he was going to be questioned on a “national security matter” and that he had no right to leave the country. After this, the journalist took refuge in his embassy in Beijing.

Birtles was subsequently questioned by Chinese police, in the presence of two Australian diplomats, and allowed to leave the country.

Smith was also visited by police at his home the same night, according to AFR, which added pressure on the two journalists was linked to the arrest of Cheng last month. Smith took refuge in Australia’s Shanghai consulate.

Relations between Australia and China have deteriorated sharply over the past two years. Canberra then decided to act against what was seen as Beijing’s growing interference in the affairs of Australia.

Canberra also caused fury in Beijing a few months ago for its requests to investigate the origins of the COVID-19 pandemic, first discovered in the Chinese city of Wuhan. China has since taken steps to reduce Australian imports and encouraged its students and tourists to avoid Australia.

The global market for Radiation cured products is projected to reach 717 thousand metric tons by 2024, valued at US$7.3 billion  GlobeNewswire