Receiving the first dose of the AstraZeneca coronavirus vaccine in Heverlee, Belgium. 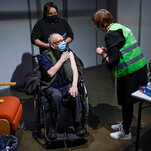 Protesters freed four police officers from behind bars in Haiti’s capital on Wednesday, local media reported, as demonstrations over a botched police raid on a gang stronghold and anger at state authorities roiled the city for a fifth day.

A deepening economic and political crisis in the poorest country in the Americas has led to a surge in kidnappings and murders as gangs have gained power, turning ever more areas of the capital and other cities into no-go areas.

Masked, heavily armed members of the Fantom 509 group, who describe themselves as disaffected police officers and ex-officers, told local media they believed their colleagues had been unjustly detained in a Port-au-Prince police station.

The police had no immediate comment on the incident or why the officers had been detained. Lawyers for the officers said in a statement they were victims of the politicization of Haiti’s police force and the failures of its justice system.

The Fantom 509 members said they were also protesting the fact authorities had not recovered the bodies of four policemen who died last Friday in a botched attack on a gang stronghold where kidnapping victims are often held.

Trainee police officers joined in the jail break while citizens took to the street for a fifth day to block roads with vehicles, debris and burning tires, also vandalizing a car dealership.

President Jovenel Moise declared on Wednesday a state of emergency in the worst gang-controlled areas for one month in order to allow state security forces to regain control of the situation.

Critics accuse the government of not sufficiently equipping the police to confront gangs, even if it has slightly raised its budget for the police this year.

They also accuse it of fostering gang activity either by design, to intimidate opponents, or simply by inaction. Gang leaders or even former government officials implicated in massacres in opposition strongholds have not been arrested.

A man from the southeast U.S. state of Georgia was charged Wednesday with killing eight people after a series of shootings at Atlanta-area massage parlors a day earlier.

The crime created a wave of fear in the Asian American community, which was already reeling from attacks that have occurred since the start of the coronavirus pandemic a year ago. The virus originated in China.

On Wednesday, police said they did not yet have a motive for the fatal shootings in which six victims were women of Asian descent. A white man and a white woman were the other two victims. A ninth person remained hospitalized with injuries, police said.

When he was arrested Tuesday, Long told police the attacks were not racially motivated. He had issues with “sex addiction,” authorities said.

The shootings appear to be at the “intersection of gender-based violence, misogyny and xenophobia,” state Representative Bee Nguyen, the first Vietnamese American to serve in the Georgia House, said.

Nguyen has been a frequent advocate for women and communities of color in the state, The Associated Press reported.

“He apparently has an issue, what he considers a sex addiction, and sees these locations as something that allows him to go to these places. And it’s a temptation for him that he wanted to eliminate,” Cherokee County Sheriff’s Captain Jay Baker told reporters.

Officials said they didn’t know if Long had actually frequented the parlors where the shootings occurred and said he may have been on his way to Florida to commit more shootings.

A law enforcement officer told CNN that Long’s family had recently kicked him out of the house because of his sexual addiction. He reportedly spent hours watching pornography.

Atlanta Police Chief Rodney Bryant said it was too early to classify the shootings as hate crimes.

President Joe Biden said he was withholding judgment about the motivations behind the shootings until there is more information.

“I am making no connection at this moment of the motivation of the killer. I am waiting for an answer from — as the investigation proceeds — from the FBI and from the Justice Department,” he said before hosting a bilateral meeting with the prime minister of Ireland. “I’ll have more to say when the investigation is completed.”

Asian spas in the United States often offer sexual gratification for money, but police would not say if the spas involved in the shootings offered sex.

The other victims’ names have not been released.

“I commend law enforcement for their quick work in arresting a suspect in the tragic shootings,” she said. “I have remained in close contact with the White House and APD as they work with federal, state and local partners to investigate the suspect, who is responsible for this senseless violence in our city.”

A police officer watches as a body is taken from the Gold Spa massage parlor after a shooting, March 16, 2021, in Atlanta, Georgia.

Governor Brian Kemp tweeted, “These horrific crimes have no place in Georgia.” Kemp also said he and the state’s first lady “are heartbroken and disgusted by the heinous shootings that took place last night.” He said they will continue to pray for the families and loved ones of the victims.

Vice President Kamala Harris said the shootings speak “to a larger issue, which is the issue of violence in our country and what we must do to never tolerate it and to always speak out against it.”

The first attack took place at a massage parlor in the town of Acworth, about 50 kilometers north of Atlanta. Authorities there said a shooter killed two Asian women, a white woman and a white man, and wounded another man.

About an hour later, police in Atlanta found three Asian women dead from apparent gunshot wounds at a beauty spa. They then found another Asian woman dead of a gunshot at a spa a short distance away.

Police said surveillance video showed the suspect’s vehicle at all three locations, and that they were very confident the same shooter was responsible for all the attacks.

After a highway pursuit, police stopped a vehicle about 240 kilometers south of Atlanta and arrested Long.

The shootings come amid a rising number of attacks against people of Asian descent in the United States.

“I want to start by saying something directly to the families of the shooting victims in Atlanta last night,” first lady Jill Biden said Wednesday. “My heart is with you. And I hope that all Americans will join me in praying for everyone touched by this senseless tragedy.”

The attack was the sixth mass killing this year in the U.S., and the deadliest since the August 2019 Dayton, Ohio, shooting that left nine people dead, according to a database compiled by The Associated Press, USA Today and Northeastern University.

Tokyo Olympics creative head Hiroshi Sasaki said he had resigned after making a derogatory comment about a popular female Japanese entertainer, in the latest controversy over insensitive remarks toward women to hit games organizers.

Sasaki, who was the head creative director for the opening and closing ceremonies at this year’s games, said he had told a planning group through a group chat that Naomi Watanabe could play a role as an “Olympig.”

“There was a very inappropriate expression in my ideas and remarks,” Sasaki said in a statement issued through games organizers early Thursday. “I sincerely apologize to her and people who have felt discomfort with such contents.”

Sasaki said he had told Tokyo 2020 President Seiko Hashimoto late Wednesday evening that he was stepping down.

Hashimoto and Tokyo 2020 CEO Toshiro Muto plan to address the matter at a news conference on Thursday, organizers said.

Last month, Yoshiro Mori stepped down from his role as president of the Tokyo 2020 organizing committee after causing a furor with sexist remarks when he said women talk too much.

Mori, 83, a former prime minister, was replaced by athlete-turned-politician Hashimoto, who has pledged to make gender equality a top priority at the games.

Sasaki was named head of the creative team in December as Olympic organizers looked to revamp plans for simplified ceremonies after the Tokyo Games were pushed back a year because of the COVID-19 pandemic.

The Olympics are scheduled for July 23-August 8;  the Paralympics are set for August 24-September 5.