A lack of readers kills local journalism, but a lack of global readership kills journalists.  Released in 2021 by the International Consortium of International Journalists, the Pandora Papers exposed international corruption among political and social elites by revealing how their use of shell companies to purchase things like properties increased taxes for everyday citizens. This investigation stemmed from the 2016 Panama Papers and 2017 Paradise Papers, though the scope of the Pandora Papers is larger than either of the previous two. To restrict or ignore coverage of widespread corruption is to reinforce the notion that the illegal activities of these elites are acceptable. To not support journalists is to bend the knee to those who break the rules the elites of society enact on others.

The ICIJ, according to their website, is a nonprofit organization that investigates “the most important stories in the world.” A consortium is simply an association of individuals or organizations. Knowing this, their name becomes self-explanatory. With their team of more than 280 journalists in more than 100 countries, they are able to create accurate articles that expose international elites. While the ICIJ does all this important work, they rely solely on donations as well as tips and ideas from the general public. The journalists work together to meet their common goals, something that they are very successful in.

The Panama Papers and Paradise Papers had detrimental and lethal consequences for their contributors. Daphne Caruana Galizia, one of the journalists who worked on the Panama Papers, was car bombed and killed in 2017, according to The Guardian. Her killing is widely believed to be due to her contributions to investigative journalism. Pelin Ünker, a Turkish journalist who worked on the Paradise Papers, also received separate coverage by The Guardian after being sentenced to jail time for exposing Turkish company corruption.

According to the ICIJ’s website, the Panama Papers consisted of over 11.5 million leaked documents contained in more than 2.5 terabytes of data, and is the largest information leak in history. For reference, an average office computer will have between 250-500 gigabytes of storage. 1,000 gigabytes is equal to one terabyte. These documents displayed corruption in 90 countries, and revealed participation by more than 300 political and social elites according to Transparency International. The individuals implicated in this leak included Elton John, Shakira and Queen Elizabeth II.

The consequences for investigative journalism in these cases sets a dangerous precedent for how journalists are treated for exposing those with power and money. There is already an emotional toll from the anxiety and pressure this kind of job has. Investigative journalists bear witness to horrific events — directly or indirectly — and are acutely aware of the dangerous position their career puts themselves, their colleagues and families in. Additional stress and pressure from the fear of being imprisoned or even killed will only dissuade people from doing this important work even more.

Intimidation is intentional on the side of those who are being exposed, as they know people will not be willing to write exposés anymore if they make publishing them dangerous. This hurts the journalistic process and the ideals of a free press. A free press should not only be free of government censorship, but should also be free of threats and intimidation. If the wealthy and powerful are able to control journalists in this way, they will be able to continue to hide their corruption and control the narrative into the future.

In his book Why Democracies Need an Unlovable Press, journalism scholar Michael Schudson reflects on the press as a force for mobilization. Schudson clarifies that this is only in the context of a partisan press — one which affiliates with a specific party or group and writes with their position in mind. According to Schudson, a non-partisan press “de-mobilizes” people because it is not told or demonstrated to citizens how they should be acting in response to the information they read. While many modern journalists are bound to their dogma of non-partisanship, the ICIJ’s information releases are partisan in their own respect. The Pandora Papers and its predecessors support a “party of the people” if you will. They seek to shed light on how the party of elites is ruling them unjustly causing them consequential damages from their actions.

This “party line” comes with none of the pomp that regular partisan politics do, though. As the third investigation of the same ilk by the ICIJ, the Pandora Papers represents continuous failures of both governments and citizens. Each investigation seemingly only spurs another, as the releases do not call the public to action like their favored candidate can. ICIJ investigations have seemingly followed an alternate trajectory, where an investigation does not deter illegal activities, but only serves as a spark for more investigations.

The Pandora Papers, as mentioned earlier, was the largest release of information in comparison to other ICIJ investigations. While the massive size of this data leak can be attributed to the fact that it is the broadest investigation by scope, that does not mean it should be less concerning. Since similar exposés are released one after another, year after year, their repetitive nature implies that these schemes are not only being slowly unearthed, but are also continuously occurring abuses of financial and political power.

An article by the BBC explores the different reactions countries had to the information released by the Pandora Papers. In countries like Jordan, Kenya, Russia, Ukraine and Ecuador where leaders were implicated, coverage either did not occur in mainstream press or was published in between bigger stories in order for it to go relatively unnoticed by the public. Coverage of the leaders’ dealings primarily came from online investigative sources which do not have nearly as much traction as the mainstream press. The broader media’s lack of coverage makes these sites seem more conspiratorial, as an everyday citizen who stumbles upon the story might think that it is just political dissenters attempting to get a one-up on their leader.

Political and social elites will continue to abuse global economic systems because they are the ones who determine the legality of their own actions. Their use of anonymous shell companies increases economic risks for everyday citizens in the countries where the shell companies are operated because they are increasing the general wealth of that nation, yet not paying much — if anything — in taxes on that large amount of money.

So, do investigations like the Pandora Papers actually accomplish anything? The short answer is no. The Pandora, Paradise and Panama Papers have yielded massive results yet have provoked little change in those they expose.

Although this ideology removes some long term responsibility from investigative journalism, it does not make them obsolete. Rather, the journalists serve simply as a spark atop the large pile of shredded paper the elites have created, hoping the global populace will make them burn.

Schudson writes in his book that “the job of the media is to make powerful people tremble.” While the journalists involved in the Pandora Papers and previous investigative projects may have accomplished that goal, there is a further step — to promote actual change. In order for works of journalism to make a difference in society, the public needs to be aware and outraged. Those in power want a docile public, unaware of the true injustices in our society. In order to create a fairer and more just world, those in the lower classes need to unite and rally against those implicated in the Pandora Papers and similar works of journalism. Only when we use journalists and their work as a rallying point will any true change start to occur.

Some surrogate mothers are trapped by the fighting as their due dates near. And newborns face uncertain fates, with many biological parents now unable to come to Ukraine. 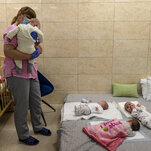 Russia’s invasion of Ukraine has displaced thousands of cancer patients, separating them from their medication and records. The oncological center in the western city of Lviv is struggling to help all comers, despite acute shortages of medicines and supplies.

For 12 days the Ukrainian city of Kherson has been under Russian occupation. In their second dispatch for the Observer, two female journalists, whose identities we are protecting, describe how tension and fear are rising.

President Vladimir Putin was reported on Saturday to have sacked and replaced at least eight generals “due to their failure in Ukraine,” and detained officers of the FSB 5th Service officers which was responsible for political information gathering in Ukraine. They include the 5th service’s director Col. Gen. Sergei Beseda and his deputy Anatoly Bolyukh.