Listen to this article
A. Craig Copetas
·4 min read

Spooks from Langley to Kyiv are likely to be quietly untangling an espionage conundrum that dare not speak its name, according to a former senior intelligence agent who was once regularly involved in such discussions: “Could President Putin really be assassinated?”

“The operation is on every intelligence agency’s design table,” a veteran clandestine operative for France’s General Directorate for External Security (DGSE) told The Daily Beast. “I know this because I used to plan them.”

To be sure, killing Putin as a means of ending his war in Ukraine is a volatile topic to raise officially. It’s also diplomatically discourteous. “Oh, wouldn’t it be great if someone internally just took this guy out and eliminated him,” Florida Republican Senator Marco Rubio recently mused, hurriedly adding, “that’s not the official policy, obviously, of the United States, no one’s talking about the U.S. doing it.”

The retired DGSE agent—an elimination specialist whose attention to detail receives high praise from his fellow liquidators—said the most efficient method would be poison.

“The attempt will be from within the Kremlin. This is not an outside job,” he said.

This would certainly not be the first attempt to assassinate a sitting Russian leader. Back in 1866, the revolutionary nihilist Dmitry Karakozov tried and failed to murder Tsar Alexander II in St. Petersburg. He was executed for his effort.

Arguably the most curious effort merely resulted in a catastrophic change of menu at the only Chinese restaurant in Moscow. The year was 1952 and the Hotel Peking on Mayakovsky Square was nearing its completion to celebrate Sino-Soviet friendship. Although the hotel didn’t open until 1955, two years after the death of Joseph Stalin, Chinese Communist Party Chairman Mao Zedong sent a favorite chef to Moscow to open a restaurant just off the hotel’s lobby.

The story—endlessly told by the Peking’s staff and management during the nearly two years that I lived in one of the hotel’s apartments—had all the trappings of an espionage horror movie. The chef was not really a cook. He was an assassin sent to kill Stalin. But the KGB got to him first, slamming a kitchen cleaver into his head, and—according to hotel legend—leaving his ghost, ax-in-head, to haunt the hallways in search of Stalin.

How today’s spooks might be proposing to take out Putin—deniably, of course—is another mystery, but a stroll down memory lane in the assassination business inspires recollections of classics like the ice-ax, the roof-toss and, the favorite of Genovese crime family hitman Richard “the Iceman” Kulinski, a nasal spray bottle filled with cyanide.

“Russian intelligence is likely the only one left that deploys poison as a default,” says the Frenchman, citing a long roster of Russian potions used to eradicate Kremlin enemies from 1957 KGB defector Nikolai Khokhlov (coffee laced with thallium) to a 2004 assassination attempt on Ukrainian presidential candidate Viktor Yushchenko (dinner seasoned with dioxin).

Watch: Boris Johnson compares Putin to a drug dealer who has the West ‘hooked on his oil and gas’ 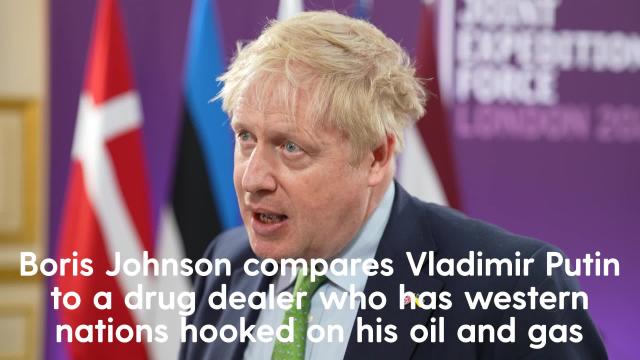 Boris Johnson compared Vladimir Putin to a drug dealer who had got western nations hooked on his supply of oil and gas.

“Vladimir Putin over the last yeast has been like a pusher, feeding an addiction in western countries to his hydrocarbons,” the Prime Minister told reporters at Lancaster House, London.

Scroll back up to restore default view.

Putin prefers poison. Polonium-210 triggered the 2006 death of Alexander Litvinenko and Novichok was responsible for the nearly fatal 2018 attack on former Russian spy Sergei Skripal in England. Back on home turf, Prince Felix Yussupov in 1916 allegedly took out the mad monk Grigori Rasputin with cyanide and a few bullets in the head; more recently, Putin’s people in 2020 attacked opposition leader Alexei Navalny with Novichok. Kremlin spokesman Dmitry Peskov at the time disagreed it was a “trend,” adding, “you’ll agree that in many countries in the world, everyday a lot of poisonings happen,” he said.

“All true,” says the DGSE agent, “but nobody does it better than the Russians.”

Yet poisoning Putin wouldn’t be an easy task. According to a source who works in the upper echelons of a Russian ministry, Putin in February allegedly sacked the some 1,000 people—from cooks to launderers to secretaries to bodyguards—who catered to his daily personal and professional needs, and replaced them with a new group of attendants.

“Putin is of course aware someone is coming after him,” says the Frenchman. “Killing Putin is not an easy task, but Putin knows it can be done, and that’s guaranteed to scare him.”

Scheduling is everything. Would-be assassins like to “gather information. Determine habits. Correlate all of Putin’s back-up options,” the covert operator adds, ticking the boxes. “Doubt Putin will travel far by vehicle. There’s no armored vehicle that can survive a few tons of explosives buried under the street.”

The former DGSE black-operations planner says any hit on Putin most likely will have someone in his inner circle, or a phantom just outside the perimeter, as the trigger man. “It will be an expensive job, a fortune,” he says. “In my experience, I’d wager an asset is already in place. There always is.”

Read more at The Daily Beast.

Get the Daily Beast’s biggest scoops and scandals delivered right to your inbox. Sign up now.

Home » Michael Novakhov - SharedNewsLinks℠ » Ex-Black Ops Agent: This Is How Putin Could Meet His End
a