COLOMBO — Sri Lanka’s entire cabinet aside from the president and his sibling prime minister resigned from their posts Sunday as the ruling political clan seeks to resolve a mounting economic crisis, with a social media blackout failing to halt another day of anti-government demonstrations.

The South Asian nation is facing severe shortages of food, fuel and other essentials — along with record inflation and crippling power cuts — in its most painful downturn since independence from Britain in 1948.

All 26 ministers in the cabinet aside from President Gotabaya Rajapaksa and his elder brother Prime Minister Mahinda Rajapaksa submitted letters of resignation at a late-night meeting, education minister Dinesh Gunawardena told reporters.

The move clears the way for the president to appoint a new cabinet on Monday — and some of those stepping down may be reappointed.

It came with the country under a state of emergency imposed after a crowd attempted to storm the president’s home in the capital Colombo, and a nationwide curfew in effect until Monday morning.

Troops armed with automatic assault rifles moved to stop a protest by opposition lawmakers and hundreds of their supporters attempting to march to the capital’s Independence Square.

The road was barricaded a few hundred meters from the home of opposition leader Sajith Premadasa, and the crowd engaged in a tense stand-off with security forces for nearly two hours before dispersing peacefully.

Eran Wickramaratne, another SLB lawmaker, condemned the state of emergency declaration and the presence of troops on city streets.

“We can’t allow a military takeover,” he said. “They should know we are still a democracy.”

Internet service providers were ordered to block access to Facebook, WhatsApp, Twitter and several other social media platforms but the blackout did not deter several small demonstrations elsewhere in Sri Lanka.

Police fired tear gas to disperse university students in the central town of Peradeniya, though protests in other parts of the country ended without incident.

Private media outlets reported that the chief of Sri Lanka’s internet regulator resigned after the ban order went into effect.

The blackout was rescinded later in the day after the country’s Human Rights Commission ruled that the defense ministry had no power to impose the censorship.

The streets of Colombo stayed largely empty on Sunday, apart from the opposition protest and long lines of vehicles queued for fuel.

But police told AFP that one man had died by electrocution after climbing a high-tension pylon near Rajapaksa’s home. Residents said he was protesting rolling power cuts.

Mass protests had been planned for Sunday before the social media blackout went into effect, but organizers have postponed the rallies until after the curfew is lifted on Monday.

The escalating protests have led to fissures within the government, with the president’s nephew Namal Rajapaksa condemning the partial internet blackout.

“I will never condone the blocking of social media,” said Namal, the sports minister.

He was among three members of the Rajapaksa family who later resigned, along with finance minister Basil and the eldest brother Chamal, who held the agricultural portfolio.

A junior party has also hinted it may leave the ruling coalition within a week.

The move would not affect the government’s survival but threatens its chances of lawfully extending the country’s state of emergency ordinance.

Western diplomats in Colombo have expressed concern over the use of emergency laws to stifle democratic dissent and said they were closely monitoring developments.

Sri Lanka’s influential Bar Association has urged the government to rescind the state of emergency, which allows security forces to arrest and detain suspects for long periods without charges.

Solidarity protests were staged elsewhere in the world over the weekend, including in the Australian city of Melbourne, home to a large Sri Lankan diaspora.

A critical lack of foreign currency has left Sri Lanka struggling to service its ballooning $51-billion foreign debt, with the pandemic torpedoing vital revenue from tourism and remittances.

The crisis has also left the import-dependent country unable to pay even for essentials.

Many economists also say the crisis has been exacerbated by government mismanagement, years of accumulated borrowing and ill-advised tax cuts.

Sri Lanka is negotiating with the International Monetary Fund for a bailout. 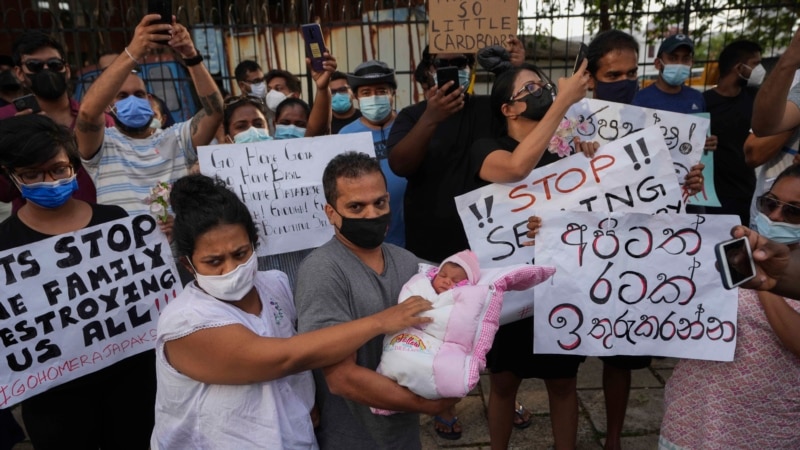 The Work to Come: Russia, Ukraine, and the West at the Negotiating Table  War on the Rocks 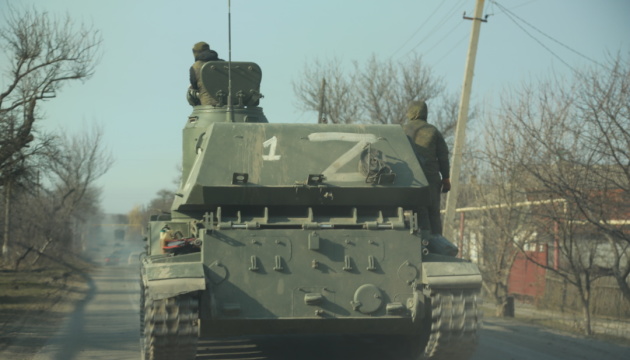 Russian invaders are leaving the Sumy location, the head of the regional armed forces administration, Dmytro Zhyvytskyi, has claimed on Telegram.

According to him, Russian troops began to actively withdraw from the Sumy region.

“Last week we saw a significant accumulation of Russian troops from Bilopillia to Konotop, all-around Konotop… New columns came in, they dug in and terrorized the area,” Zhyvytskyi explained.

He said that this accumulation of army tools was owing to the fact that the occupiers covered the retreat of their forces. Now the columns have left the territory of the location, he claimed.

“We have noticed a great deal of products coming toward Russia, with our artillery chasing them. The Armed Forces of Ukraine and the territorial protection have driven them out through the complete Chernihiv region,” Zhyvytskyi mentioned.

At the same time, he stressed that some Russian forces however continue being in the Sumy area, and the territory is at present currently being cleared of invaders.

In accordance to the General Employees of the Armed Forces of Ukraine, from February 24 to April 3, Russia lost about 18,000 troopers, 644 tanks, 143 aircraft, 134 helicopters, and many other weapons and equipment.

All through a pre-taped appearance that aired on Sunday, Zelenskyy tackled the ongoing war with Russia, inquiring viewers for aid in telling the story of Ukraine’s invasion by Russia.

Zelenskyy likened the invasion to a lethal silence threatening to extinguish the dreams and lives of the Ukrainian people, such as young children.

“The war will not enable us select who survives and who stays in eternal silence,” the Ukrainian president commenced. “Our musicians put on body armor alternatively of tuxedos. They sing to the wounded in hospitals.  They sing to the wounded in hospitals, even to all those who simply cannot listen to them. But the music will break as a result of in any case.”

He pointed out, “We protect our flexibility. To are living.  To like. To seem.” 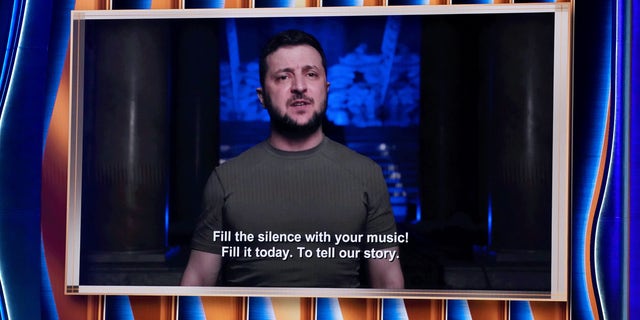 (Picture by Kevin Mazur/Getty Images for The Recording Academy)

Zelenskyy went on to add, “On our land, we are battling Russia which provides terrible silence with its bombs. The useless silence. Fill the silence with your audio. Fill it right now. Explain to our story.”

Zelenskyy also additional, “Assistance us in any way you can. Any – but not silence.”

According to Selection, Zelenskyy filmed the pre-taped section inside the final 48 hours from a bunker in Kyiv.

“On our land, we are battling Russia which brings terrible silence with its bombs. The dead silence. Fill the silence with your tunes. Fill it these days. Explain to our tale.”

Zelenskyy’s physical appearance was followed by a performance led by John Legend and Ukrainian musicians, Siuzanna Iglidan and Mika Newton, as properly as poet Lyuba Yakimchuk.

Photos from the war were revealed on screens powering them.

Newton sang “Free of charge” by Legend alongside Iglidan. Newton is from Burstyn, Ukraine. The Grammys went on to point out that her sister is at this time back home serving in the Ukraine army as they fight in opposition to Russia. 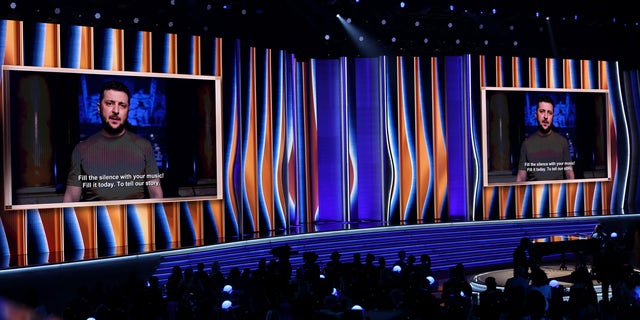 For the duration of a pre-taped visual appearance that aired on Sunday, Zelenskyy dealt with the ongoing war with Russia, asking viewers for help in telling the story of Ukraine’s invasion by Russia.

During the efficiency, Iglidan performed the bandura, a plucked-string Ukrainian instrument, while Legend was on the piano.

Iglidan, who is from Odesa, Ukraine, shared pics top up to her large general performance on Sunday, captioning the photos, “I’m sitting on the center of this phase in front of all these famed musicians — Woman Gaga, John Legend, quite a few, lots of some others,” she said.

She continued: “I acquired on stage and looked at this huge theater and barely holding my tears, began crying. I could not cease my feelings mainly because I’m there in front of all the U.S. exhibiting how beautiful Ukraine tradition and tunes sounds like.”

Click on Here TO Indication UP FOR THE Enjoyment Publication 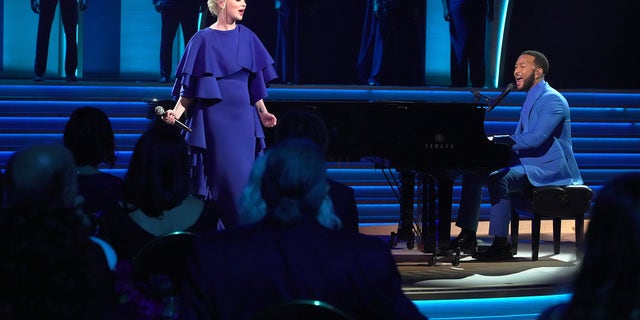 (Image by Kevin Mazur/Getty Photos for The Recording Academy)

Yakimchuk was also on stage for the duration of the Grammy’s general performance on Sunday evening. The Grammys mentioned that Yakimchuk had fled Donbas.

Zelenskyy and the overall performance been given a standing ovation.

Simply click Here TO GET THE FOX News App

Through an job interview previously on Sunday, Zelenskyy  reacted to disturbing new visuals coming out of a suburb of the cash Kyiv demonstrating the bodies of executed civilians by calling Russia’s attacks “genocide.”

“In truth, this is genocide,” Zelenskyy explained during a “Experience the Nation” job interview on CBS. “The elimination of a whole country, and the people — we are citizens of Ukraine.”