After a bruising election in which she was tarred by both her allies and adversaries for running a lackluster campaign, Democrat Katie Hobbs pulled off a come-from-behind victory against Republican Kari Lake to clinch the Arizona governor’s office, according to the Associated Press.

The AP called the race Monday night after Arizona’s most populous county released a new batch of roughly 71,000 votes, inching closer to completing the count. Most of those were mail ballots hand delivered on Election Day, which the Lake campaign was relying on to close the gap. Lake had been banking on the expectation that those voters would lean in her favor, based on former President Donald Trump winning most voters who dropped off their mail ballots on Election Day in 2020 and estimations that a substantial percentage of GOP voters stayed on the absentee rolls but didn’t trust mailing them in or depositing them in drop boxes.

Ultimately, those hopes faded when Monday’s ballot drop did not provide Lake with enough of those voters to surpass Hobbs’ lead.

The contest for Arizona governor was defined in large part over the two candidates’ dueling stances on the last election. Hobbs, as Arizona’s secretary of state, gained notoriety two years ago for resisting a pressure campaign by Trump and his allies to decertify Biden’s win and defending the integrity of Arizona’s elections. Lake, in contrast, was outspoken in claiming that Biden did not legitimately win Arizona, despite multiple investigations having found no evidence of substantial fraud.

Hobbs’ victory is part of a nationwide wipe-out in the midterms of GOP gubernatorial candidates who embraced the former president baseless claims that the 2020 election was stolen from him, including Doug Mastriano in Pennsylvania and Tudor Dixon in Michigan.

Hobbs also campaigned as a good-government liberal who would work to reduce poverty and expand voting access. She championed a series of state-level tax credits for low-income families, and she vowed to try and restore the right to an abortion enshrined in Roe v. Wade. Since the Supreme Court overturned the 1973 ruling in June, Arizona has been mired in a legal dispute over which law is in effect: a total ban on the procedure from 1964 or a 15-week ban signed into law this year by Republican Gov. Doug Ducey.

Hobbs, 52, also sought to characterize her opponent as an “extremist” who could not be trusted with the powers and responsibilities of the governor’s office. “Our race for governor isn’t about Democrats vs. Republicans,” Hobbs told TIME last month. “It’s about sanity vs. chaos.”

Lake, the former local news anchor who parlayed her built-in following and media acumen into a political career, became a right-wing sensation who would regularly draw huge crowds. She often went viral by lambasting old colleagues in the press, and sometimes manufacturing feisty clashes with reporters. Political pundits saw her as a potent threat to the soft-spoken Hobbs.

Read more: How Kari Lake Went From Local Anchor to New Face of the MAGA Right

One of Hobbs’ most controversial decisions over the campaign was to refuse to debate Lake. Hobbs said her opponent would use the opportunity to create a spectacle and “spread conspiracy theories.” The former social worker’s reluctance to go toe-to-toe with Lake on a debate stage was widely cast in the press as a cowardly move that could cost her the election.

At the same time, Hobbs was hobbled by a former employee’s lawsuit over racial and sexual discrimination—leading Lake to brand her opponent a “twice-convicted racist”—and a recent registration error in the secretary of state’s office that stood to affect nearly 6,000 voters.

In the end, though, Hobbs surmounted those challenges to defeat a controversial candidate who not only made waves by casting doubt on the integrity of the 2020 election, but who planned to embark on an aggressive, boundary-pushing populist conservative agenda while in office.

Lake vowed to issue a Declaration of Invasion over the border, root out “woke teaching” from schools, and block vaccine mandates of any kind. She also planned to engage the Biden administration in a series of legal fights—on everything from education to immigration—with the goal of engineering favorable rulings from a conservative Supreme Court. 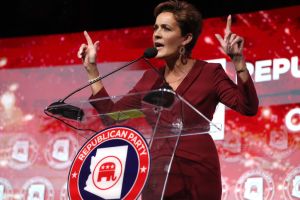 Lake’s Arizona loss didn’t happen in a vacuum. The other Trump-aligned candidates on the statewide ballot lost by even larger margins, including Blake Masters for U.S. Senate and Mark Finchem for Secretary of State.

The Republican running for statewide office who had the strongest showing in Arizona was Kimberly Yee, who won re-election as state treasurer and who Trump didn’t endorse. As of Monday night, Yee was leading by nearly 260,000 votes. While she was the only incumbent running statewide, Arizona politicos saw it as a telling sign that many Republicans and independents voted for her and not the rest of the MAGA slate. “Some Republicans are voting for Yee to ensure that the Lake cartel clearly sees their collective middle finger,” Steve May, a former Arizona state legislator, tells TIME.

The Arizona governor’s race began in chaotic fashion last Tuesday, when more than 20% of tabulators in Maricopa County had problems scanning ballots, leading to voter frustration and the promulgation of false theories on the internet of voter suppression directly targeted toward Republicans. By midday, county officials had diagnosed and fixed the problem.

Maricopa County makes up more than 60% of the state’s registered voters, and since the 2020 election, Republicans across the country have overwhelmingly preferred to vote in person on Election Day. But while such tabulation snafus had the potential to disenfranchise more conservative voters, no evidence has emerged to show that any votes were prevented from being counted by night’s end.

The election, instead, rested on what are known in Arizona as “late earlies”—an oxymoronic term that refers to mail ballots that voters deliver in person on Election Day.

While mail ballots returned early are usually processed and tabulated before Election Day, that process doesn’t typically begin for “late earlies” until the day after the election, when they go through signature verification and other authorization processes to ensure their legitimacy.

This year, Maricopa County received roughly 290,000 such ballots—more than 70% more than two years ago. That led to an excruciatingly long vote count that right-wing media figures portrayed as either a sign of incompetence or malfeasance. It was neither. Arizona’s election workers were operating under the confines of election laws passed by Republicans in the state legislature.

Other states that counted votes faster don’t allow for mail ballots to be delivered as easily on Election Day. Florida, for instance, only allows voters to drop off mail ballots at county elections offices on Election Day, not polling places all across the state.

That discrepancy may also account, in part, for Arizona having a higher turnout level than Florida. Fifty-nine percent of Arizona’s registered voters cast ballots in 2020, whereas 57 percent of Florida’s did. The two-percentage-point point difference in turnout can be decisive in a tantalizingly-close race, such as the one between Hobbs and Lake.

As of Monday night, Lake had yet to concede, as many of her detractors feared after she refused to tell CNN last month whether she would accept the outcome if she lost.

By Monday evening, Lake campaign insiders had seemed to accept her loss.

“Maybe she’ll run again for something,” one of them tells TIME. “Who knows?”