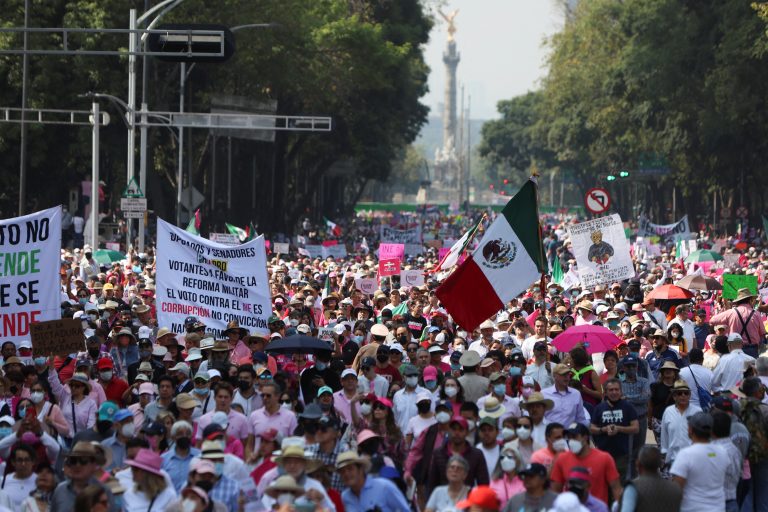 MEXICO CITY (Reuters)—Tens of thousands took to the streets in Mexico on Sunday to protest President Andres Manuel Lopez Obrador’s plan to overhaul the country’s electoral commission INE in what they fear would concentrate power in the hands of the government.

Lopez Obrador, who put the plan forward in April, has long criticized the country’s electoral authorities, including accusing them of helping to engineer his defeats when he ran for the presidency in 2006 and 2012.

He has said that the reform would let citizens elect electoral authorities and reduce the influence of economic interests in politics. It would also cut financing for political parties and limit advertising time.

It sparked widespread concerns that the changes could presage a power grab because it gives the president more control over the electoral systems.

In the past, Lopez Obrador pursued contentious policies by pitching referendums – including on the cancellation of a part-built airport – to claim popular mandates for his objectives.

Protesters in Mexico City, many holding placards and banners or wearing t-shirts with slogans “defending the INE”, started at the Angel of Independence monument.

It gathered momentum during the day as protesters moved on Reforma Avenue towards the Monument to the Revolution.

A Reuters witness estimated tens of thousands protesters had taken part while a police officer on Reforma who witnessed the march estimated 50,000.

Organizers put the number at hundreds of thousands but some political allies of Lopez Obrador gave far lower estimates.

It is one of the biggest marches against Lopez Obrador’s policies so far.

“Democracy in Mexico is in danger,” said Ana Lilia Moreno, an economist who attended the march in the capital with her eight-year-old daughter.

“I hope that many young people – and even those who are normally not interested in politics – will attend, that they will value our institutions, and will defend what our parents and grandparents built to mature politically.”

Protesters shared images from other cities on social media.

Lopez Obrador posted a video message on his Twitter as he celebrated his 69th birthday – but did not address the protests.

His ruling Morena party and its allies would need a two-thirds majority in Congress to make changes to the constitution. Currently, the party is short of that majority.