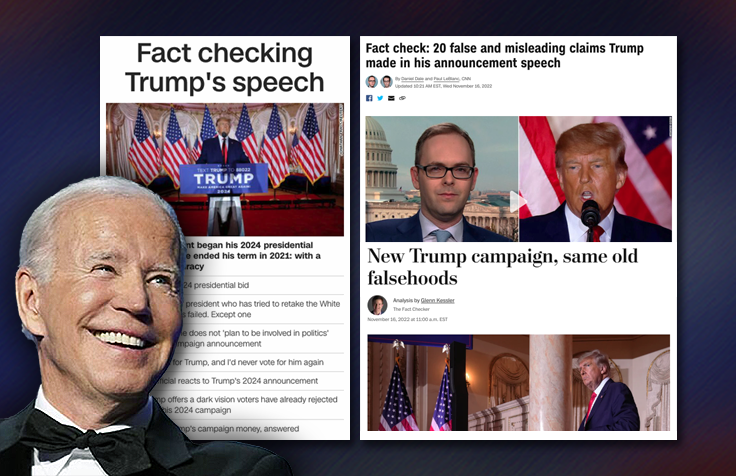 What happened: Donald Trump is officially running for president again.

Why it matters: The mainstream media’s army of professional fact-checkers can finally go back to work. Trump’s entry into the 2024 presidential campaign means journalists can stop pretending to be interested in “speaking truth to power” by holding the politicians in power—President Joe Biden and the Democratic Party—to account. Let the feeding frenzy begin.

Happy days are here again: Media outlets responded to Trump’s campaign announcement on Tuesday by flooding the zone with Trump content. Why wouldn’t they? Ratings and profits are way down since Trump left office, and his reemergence means that millions of brain-damaged liberals will require continuous reassurance that Trump is bad and opposing him is morally righteous. Thanksgiving is just around the corner, so they’re also going to need plenty of Trump fact-checks to print out and share with their unenlightened relatives.

Don’t call it an obsession: Trump’s name was all over the New York Times website on Wednesday. In addition to fact-checking his speech, the Times published the following Trump-centric articles within the last 48 hours:

• “Trump’s Announcement Is a Sign of Weakness” by Ross Douthat

• “The Big Liar and His Losing Little Liars” by Thomas Friedman

• “America Deserves Better Than Donald Trump” by The Editorial Board

• “The Chaos Inside Donald Trump’s Mind” by Michael Wolff

• “Don’t Buy Into the Trump-DeSantis Smackdown” by Michelle Goldberg

• “Trump, the Black Hole and Me” by Patrick Healy

• “How Is It Possible That We Are Still Talking About This Man?” by Peter Wehner

Some context: Prior to publishing “We Fact-Checked Trump’s Speech” on Tuesday night, the Times was primarily focused on fact-checking Ted Cruz, Mitch McConnell, Kevin McCarthy, Joe Rogan, GOP campaign ads, and “Republican lawmakers are seizing on misleading claims.” In fairness, the paper also published an article about the time Biden “verbally fumbled” during a campaign speech in Florida. Additionally, a search of the Times website found a single Biden fact check published during his presidency—a week after he took office in 2021—which commended his “regard for basic facts.”

Like a phoenix from the ashes: Trump’s return is also great news for #Resistance wine moms and other fans of CNN fact-checking guru Daniel Dale, who could be hard to locate at times during the past 22 months. Dale made his triumphant return on Tuesday with “Fact check: 20 false and misleading claims Trump made in his announcement speech.” (Glenn Kessler of the Washington Post only managed to find 19. Booyah!)

Until now, most of Dale’s fact-checking during the Biden administration has focused on GOP campaign ads, low-level Republican officials, and “right-wing websites and social media personalities.” You could tell his heart just wasn’t in it.

The post Trump Is Back (And So Are the Fact-Checkers) appeared first on Washington Free Beacon.