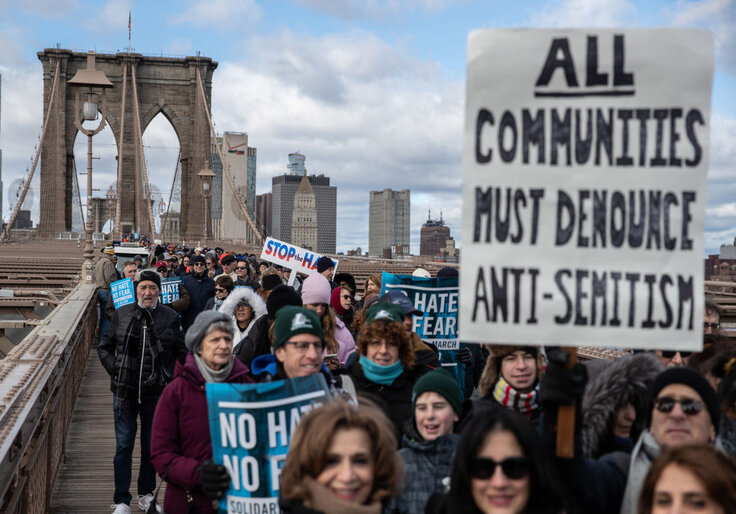 A “pervasive and relentless assault on Jewish identity” is occurring daily at colleges across America, according to a new report from a watchdog group that found assaults on Jewish students and their identity doubled in the 2021 to 2022 academic year, particularly on campuses most popular with Jewish students.

There were 254 attacks on 63 different college campuses with large Jewish populations, with Harvard University, the University of Chicago, Tufts University, UCLA, and Rutgers University having the highest number of incidents, according to a report by the AMCHA Initiative, a Jewish advocacy group that says its findings expose an “insidious,” never-before-revealed campus trend.

While other watchdog groups, such as the Anti-Defamation League, have broadly examined whether campuses are safe for Jewish students, the AMCHA study is unique: It “investigated the nature, scope, and trajectory of the threats to Jewish student identity on U.S. campuses, and it found a staggering doubling of such threats at 60 percent of schools most popular with Jewish students.” Instances of bullying and intimidation towards Jewish students, for instance, tripled in the past year, according to the report, which tracked incidents at more than 100 colleges and universities in total. More broadly, threats to Jewish identity rose 100 to 200 percent from the past year, according to the findings.

With rising anti-Semitism in America making front page news as a cadre of prominent celebrities promote conspiracy theories about Jews, the situation on America’s college campuses is growing bleaker. Anti-Israel and anti-Zionist movements are fueling this anti-Semitic hate, according to the AMCHA Initiative, which determined that campus “faculty and academic departments played a significant role in attacks on Jewish identity.” The latest findings, the AMCHA Initiative warns, signal “a major crisis for American Jewry.”

Incidents tracked by the group range from outright attacks on Jews to efforts to suppress pro-Israel voices and block them from participating in campus organizations, efforts that are reminiscent of the Nazis’ campaign to eliminate Jewish people from public life.

At George Washington University, for instance, flyers stating, “Zionists Fuck Off” were plastered on the campus’s Hillel building, a center for Jewish life. And at the University of Chicago, the Students for Justice in Palestine, an anti-Israel group known to engage in violence against Jews, “launched a campaign dubbed, ‘Don’t Take Shitty Zionist Classes,’ that urged students to boycott several classes containing a ‘Zionist agenda,’” according to the report. A Jewish student at the University of Connecticut was “kicked out of an a cappella group because of pro-Israel remarks she had made on social media.”

At schools where faculty members embraced the Boycott, Divestment, and Sanctions movement (BDS), which wages economic warfare on Israel, attacks on Jewish students were “three to seven times” more likely to occur, according to the report. Around 20 percent of the documented threats to Jewish identity took place during events sponsored by various academic departments, highlighting the danger of institutionalized anti-Israel attitudes.

“More than one-third of anti-Zionist challenges to well-established definitions of Zionism, Judaism, and anti-Semitism took place in programs sponsored by academic departments,” the report found.

The result has been a massive uptick in efforts to bully Jewish students into disavowing their religious identity and support for Israel. Campus bids to “disconnect Zionism from Judaism and from progressive causes nearly tripled,” according to the report, and the “promotion of anti-Zionist Jews as more authentic than Zionist Jews doubled.” These efforts are specifically meant to intimidate Jewish students who support Israel and view the Jewish state as a primary aspect of their identity.

Additionally, “calls to rid the campus of Zionism increased more than six-fold, and attempts to cancel Israel-related events, programs, classes, and trips increased nearly five-fold,” according to the report. Efforts to force Jewish students into rejecting trips to Israel also increased nearly 20-fold.

“The pervasive and well-coordinated attacks on Jewish identity will undoubtedly result in increasing numbers of Jewish students feeling the need to hide their Jewish identity on campus, or to detach from Jewish life partially or completely,” according to the report. “In the long term, the sheer scope of the assault on Jewish student identity—which is negatively affecting the level of communal identification and participation of an entire generation of young Jewish adults—presages a major crisis for American Jewry.”

On campuses across the nation, she said, there are efforts to “completely strip Jews of our right to even call out anti-Jewish bigotry when it happens. And the irony here is that at a time when identity politics dominate the college scene and everyone’s individual identities are further defined and further celebrated, attempts are being made to chisel away and erase the Jewish identity and deny us the protections from the harassment that is growing by the day.”