There is little doubt that Kassym-Jomart Tokayev will extend his rule over Kazakhstan by seven years in presidential elections on Sunday. What is less clear is how the former diplomat can reduce his resource-rich country’s dependence on Russia without alienating it.

Tokayev – who opinion polls predict will comfortably win reelection at the weekend – has pushed back publicly against territorial claims made by Russian President Vladimir Putin in Ukraine, souring relations between the former Soviet republic and Moscow.

Russia and Kazakhstan share the world’s longest continuous land border, prompting concern among some Kazakhs about the security of a country with the second-biggest ethnic Russian population among ex-Soviet republics after Ukraine.

At a forum in St. Petersburg in June where Tokayev shared the stage with Putin, he said his government did not recognize Russian-controlled regions in eastern Ukraine and that Kazakhstan upheld the inviolability of internationally recognised borders.

His blunt remarks took observers by surprise and prompted angry threats from some pro-war commentators in Russian media.

And last month, when Tokayev hosted a summit of Central Asia presidents, he held face-to-face meetings with other leaders but no bilateral talks with Putin, amid a cooling in relations.

The 69-year-old Tokayev took office in 2019 after Kazakhstan’s previous president resigned amid protests. After surviving unrest in January triggered by fuel price rises, Tokayev unveiled sweeping reforms – including changes to the constitution and a hike in the minimum wage – and called snap elections.

Amid popular demand for sweeping change, he has also accelerated plans to increase the amount of Kazakh oil exported west across the Caspian Sea, avoiding Russia to the north.

Kazakhstan currently relies heavily on the Caspian Pipeline Consortium (CPC), one of the world’s largest pipelines that crosses Russia to the Black Sea port of Novorossiisk. Out of total exports of 68 million tonnes a year, 53 million tonnes of Kazakh oil move through it.

While there is nothing to replace that volume, a push announced last week to increase trans-Caspian shipments tenfold in the coming years, to 20 million tonnes, was the clearest sign yet of a move by Tokayev’s government to limit economic reliance on Russia.

“We have developed a roadmap to diversify (oil) exports,” Prime Minister Alikhan Smailov told reporters. “Work is underway to expand and increase oil export capabilities in all directions.”

But meeting that target will not be easy. The chief executive of Khazakhstan’s state oil firm KazMunayGaz said this week that the target of 20 million tonnes was a “medium-term” aim.

“Comparing something that is good, cheap, and works (CPC) with something new, unknown, and more expensive: this is not an easy decision to make from the economic point of view,” Magzum Mirzagaliyev said.

Kazakstan’s presidency and Russia’s foreign ministry did not immediately respond to a request for comment to this story. A spokesman for Tokayev said in July that Russia remained a strategic partner and that plans to diversify energy supply routes were not driven by politics.

The main alternative route to the CPC is the Baku-Tbilisi-Ceyhan (BTC) pipeline, which originates in Azerbaijan on the opposite side of the Caspian to Kazakhstan. From Baku, oil can also travel by pipeline to the Black Sea port of Supsa in Georgia and from there onto world markets.

But getting Kazakh oil to Baku requires either tanker shipments across the sea or the construction of a trans-Caspian pipeline. The existing fleet is modest, and pipeline talks between the sea’s littoral states have stalled for decades over territorial disputes.

Both options would be needed to reach the 20 million tonne target as Kazakh ports on the Caspian lack the necessary capacity and there is no tanker fleet in place to move such volumes.

Smailov said last week that Kazakhstan would start by sending an additional 1.5 million tonnes a year via BTC starting from 2023, gradually rising to 6-6.5 million tonnes.

He did not detail how the target would be reached. Kazakhstan’s Aktau port, the only one equipped to load oil tankers, can handle up to 5.5 million tonnes. Another port, Kuryk, can be used to load train ferries carrying oil.

Smailov said Kazakhstan’s biggest oil producer, Chevron-led (CVX.N) Tengizchevroil, had doubled its railcar fleet to move crude to Georgia’s Black Sea port of Batumi, which is owned by Kazakhstan and can be reached via Russia or the Caspian.

The company did not immediately respond to a request for comment.

Three traders said the Kazakh unit of France’s TotalEnergies (TTEF.PA) had started regular shipments via BTC since September, taking a hit to profits in favour of stability. TotalEnergies did not immediately respond to a request for comment.

Tokayev has also called for oil storage facilities to be built on the Caspian coast, which would prevent pipeline disruptions from immediately affecting production.

To the east, a pipeline running from Kazakhstan to China is currently used to transport about 10 million tonnes of Russian crude a year, roughly half of its capacity, plus some 2 million tonnes of Kazakh crude.

Kazakhstan’s ability to fill that pipeline is limited by demand on the Chinese side and pricing, which is reviewed annually.

Since the outbreak of war in Ukraine, Central Asia’s five former Soviet republics have increasingly been standing up to Moscow, aware of their new-found leverage as Russia looks to their markets and trade routes in a bid to circumvent Western sanctions.

One senior government official said a resounding election win for Tokayev could embolden him to further distance himself from Russia.

The official, who declined to be named to discuss sensitive political issues, said Tokayev wants to prove he can lead his country of 20 million people without a patron, after he split from his long-serving predecessor Nursultan Nazarbayev in January following the unrest over fuel price increases that escalated into an attempted coup.

Putin backed Tokayev and a Russia-led military bloc sent troops to Kazakhstan at a time when the Khazak leader could not fully trust his own security forces, prompting criticism that he would now be in Moscow’s debt.

His actions since Russia launched its invasion of Ukraine in February suggest otherwise.

Kazakhstan has called for peace and refused to recognise referendums by which Russia claimed to have annexed some Ukrainian regions – votes derided as a sham by Ukraine and the West.

Even before the war, the official said Kazakhstan had resisted a push by Moscow in 2020 for a single currency and joint parliament within the post-Soviet Eurasian Economic Union, as part of a five-year strategic plan.

The official said Kazakhstan’s government was reassessing its relations with Russia, although the giant neighbour still has significant leverage.

The CPC has suffered more disruptions this year than at any other time, forcing Kazakhstan to trim its 2022 oil production and exports in a setback to state finances. 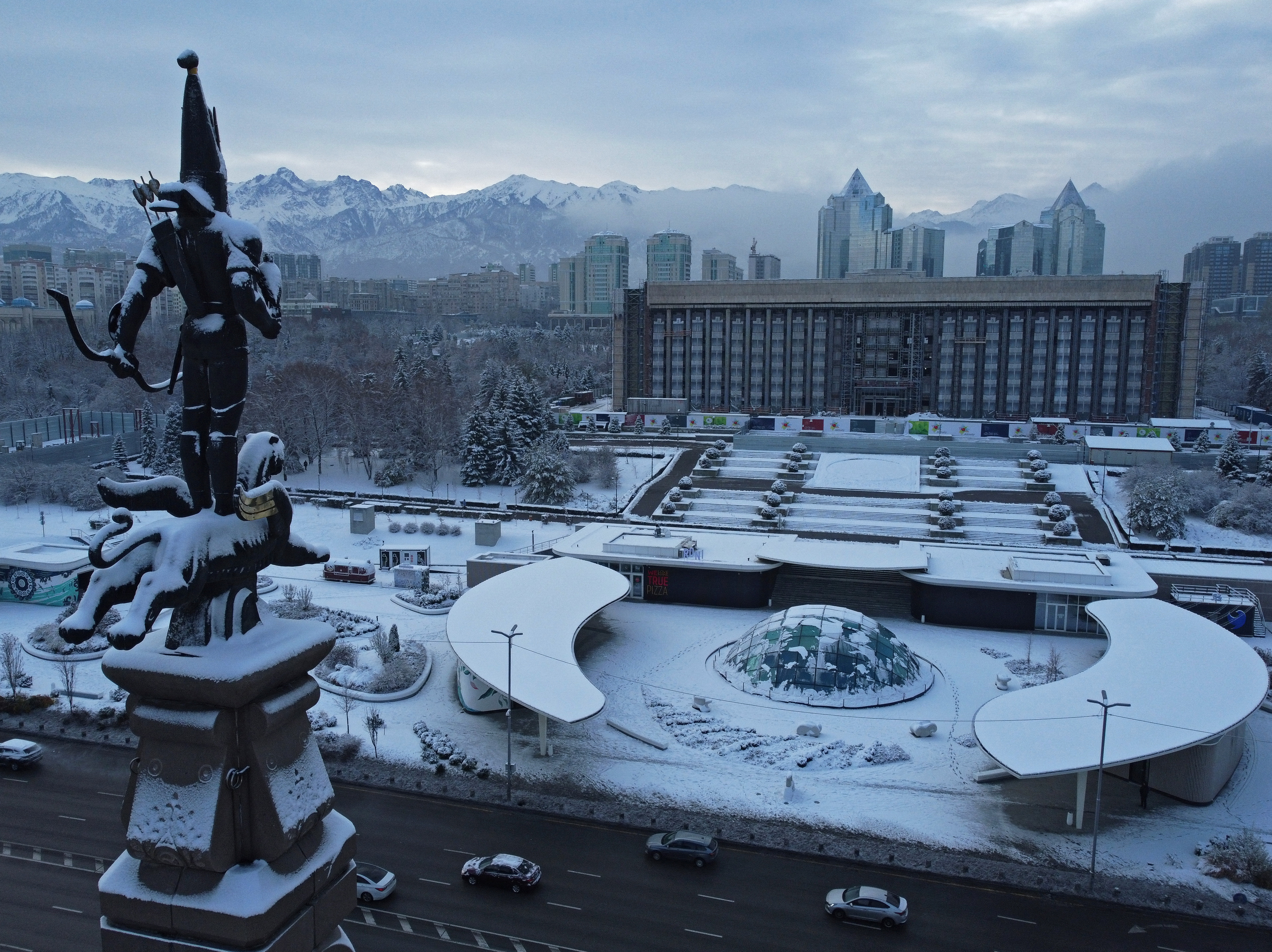 A view shows the Monument of Independence in front of the city administration headquarters in Almaty, Kazakhstan, November 17, 2022. REUTERS/Pavel Mikheyev 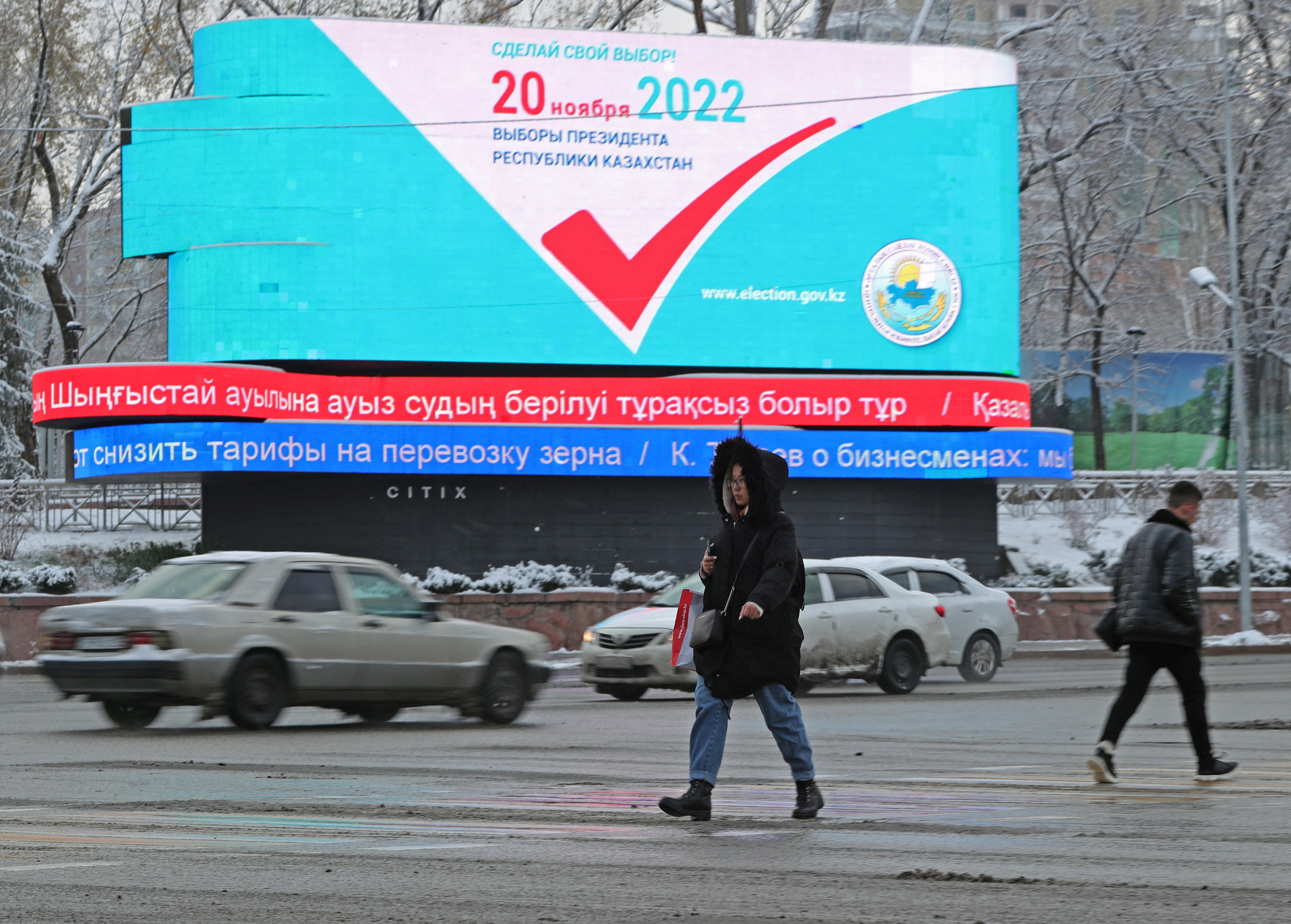 People walk past a board informing of the upcoming presidential election in Almaty, Kazakhstan November 17, 2022. REUTERS/Pavel Mikheyev 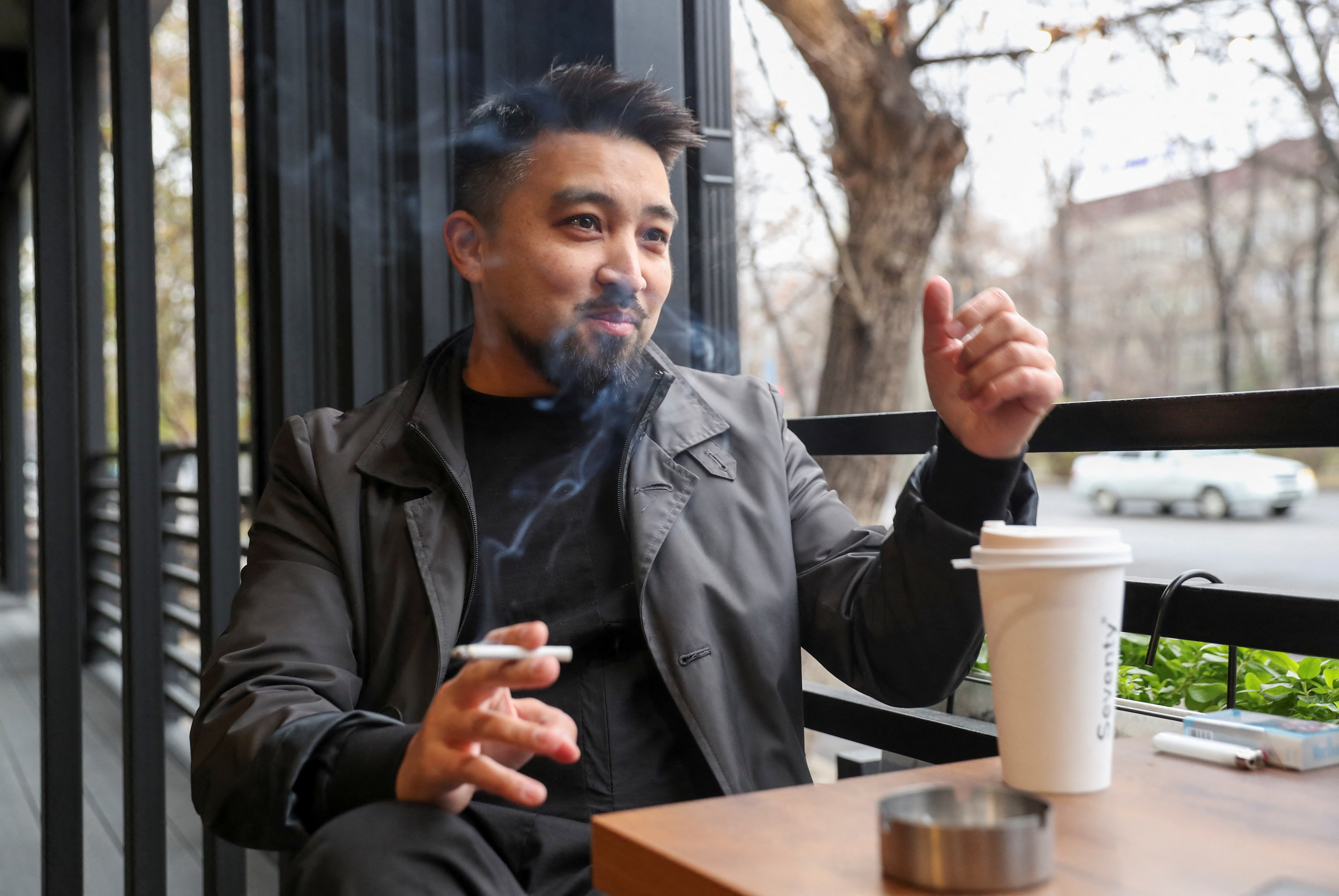 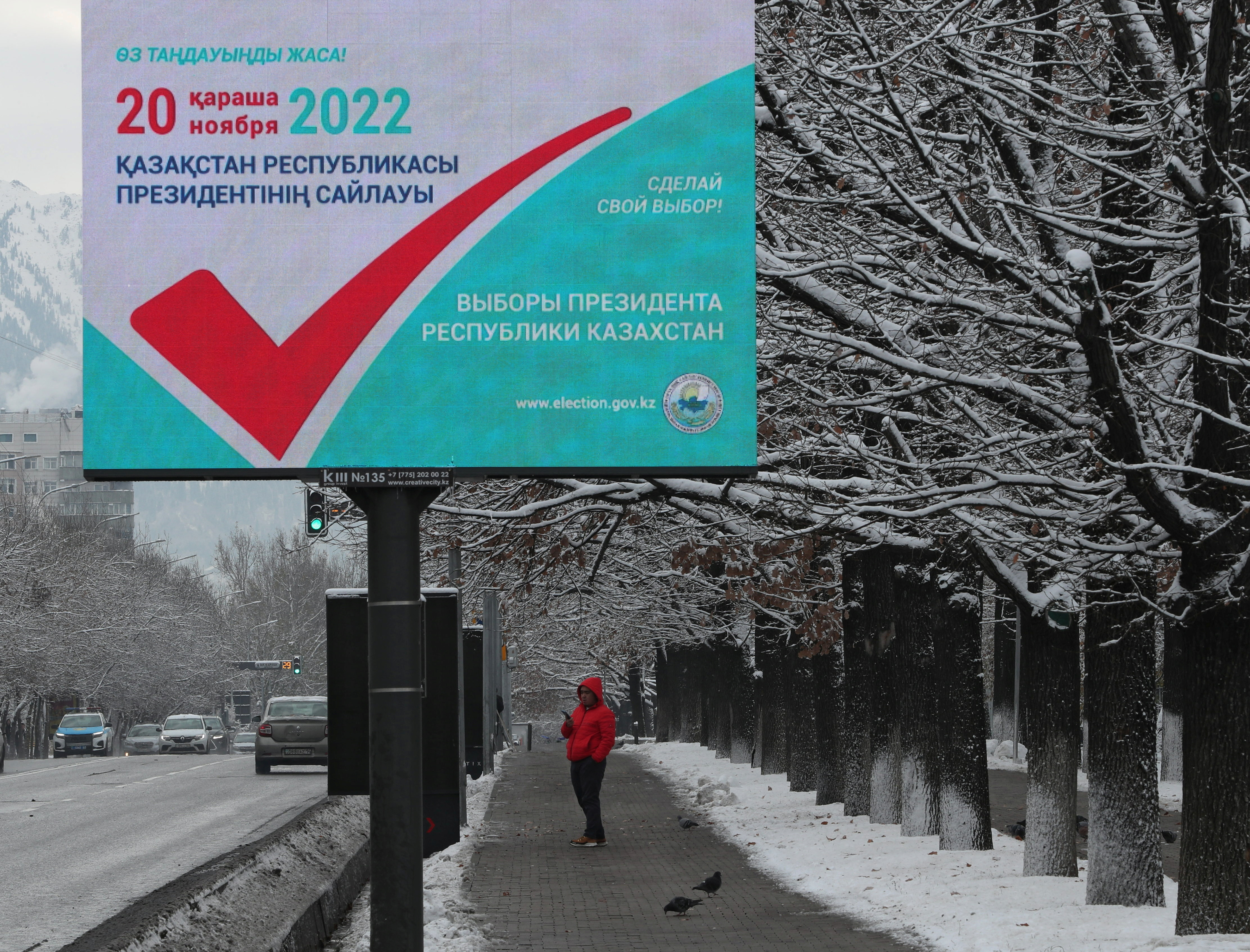 A man stands near a board informing of the upcoming presidential election in Almaty, Kazakhstan November 17, 2022. REUTERS/Pavel Mikheyev 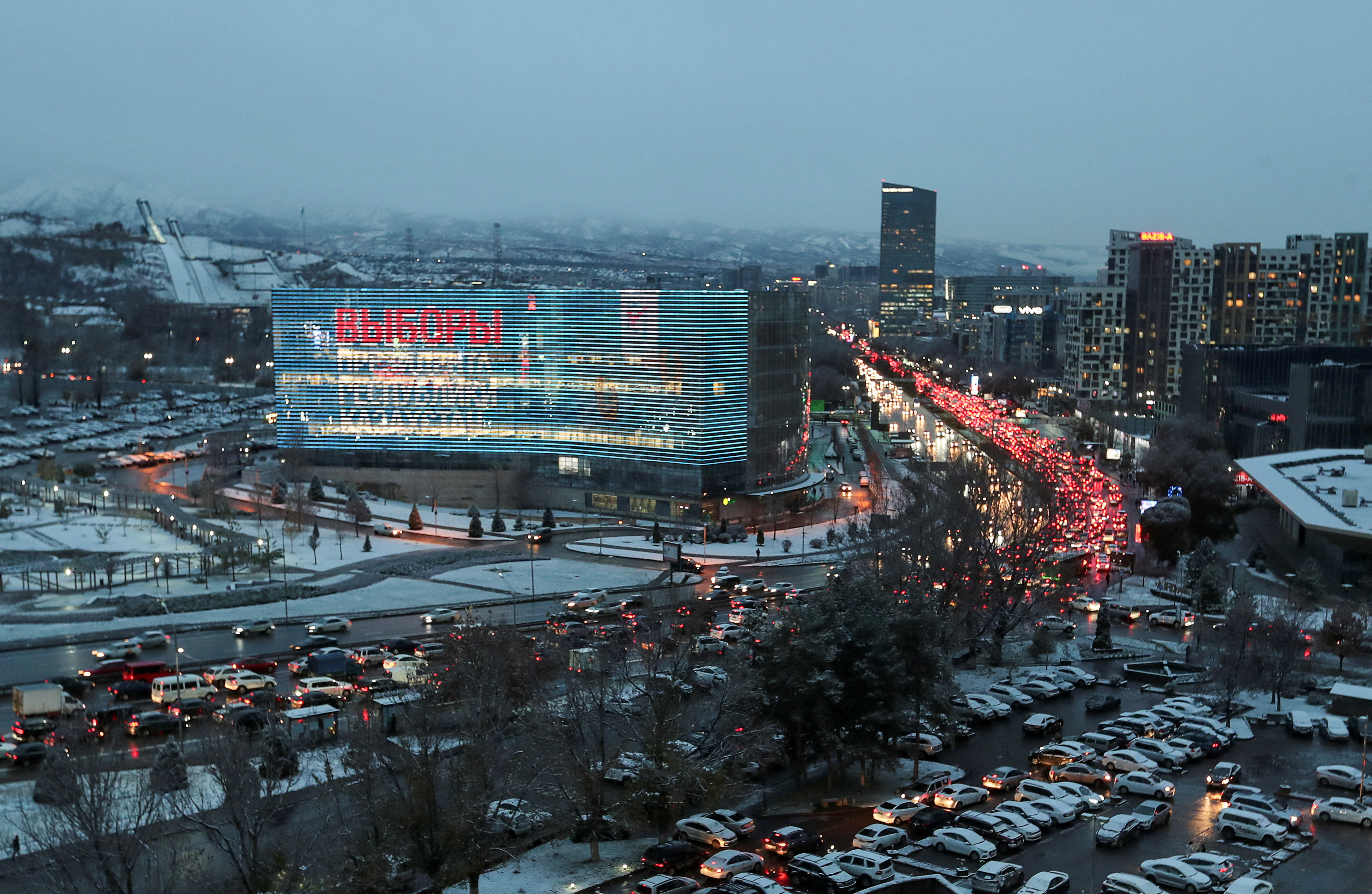 An electronic screen, installed on the facade of a business centre, displays information on the upcoming presidential election in Almaty, Kazakhstan, November 16, 2022. REUTERS/Pavel Mikheyev
Advertisements
Advertisements