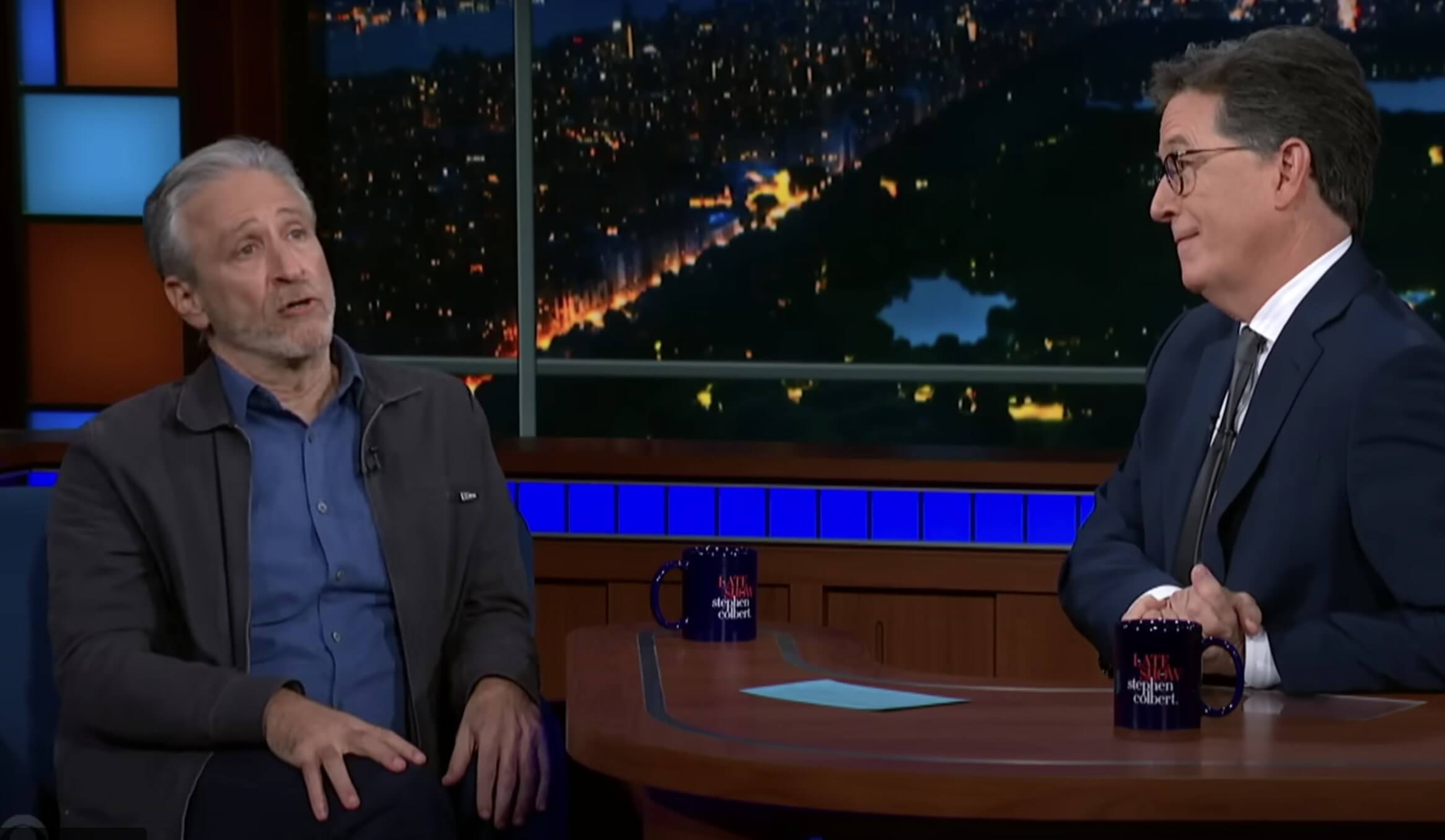 Jon Stewart gained praise and acclaim for his “empathetic” and “thoughtful” interview with Stephen Colbert on the “The Late Show” Tuesday night. He discussed recent antisemitic rhetoric from celebrities such as Kanye West and Kyrie Irving, as well as a monologue delivered by his close friend Dave Chappelle.

The “Saturday Night Live” monologue Chappelle delivered, responding to West and Irving’s conspiracy theories, was quickly excoriated by ADL CEO Jonathan Greenblatt, who tweeted that  he was disturbed to see the show “not just normalize but popularize” antisemitism.”

Stewart’s interview was meant to be a sort of salve from our “spokesJew” (Stewart’s words), addressing what has not only been a painful and scary experience for Jews, but also one that has disproportionately affected the Black community — the focus of the discussion has largely been on three Black celebrities — and largely erased Black Jews.

But Stewart profoundly failed, and further normalized antisemitism and racism in the process. He did this through surprisingly facile, empty arguments largely based in conjecture rather than reality.

At the beginning of his interview, Stewart responded to the idea that Chappelle normalized antisemitism by pointing out that it has already become mainstream. “I don’t know if you’ve been on comments sections on most news articles, it’s pretty [bleeped] normal.”

This was a painfully fallacious argument: Antisemitism spread by a celebrity to millions doesn’t matter, because the world already hates us.

But celebrity speech fuels even more of the behavior that puts Jews and other minorities in danger. When leaders of any kind engage in hate speech, hateful acts become normalized. A recent study, for example, found that when an “elite” engaged in prejudiced speech, this emboldened the prejudice in their followers. When other elites stayed silent, the followers saw that as an indication of a new norm.

Hate speech leads to hate violence, and staying silent when influential figures like Chappelle or Irving spread antisemitic rhetoric is not a viable response.

Referring specifically to Kyrie Irving’s recent suspension from the Brooklyn Nets, Stewart said, “Penalizing someone for having a thought … I don’t think that’s a way to change their minds or gain understanding.”

When asked by Colbert later in the interview to explain what his solution was, Stewart said, “The only way to heal a wound is to open it up and cleanse it.”

This is the classic “marketplace of ideas” point made by many liberal-minded free speech absolutists. For years, they have argued that hate speech and other forms of dangerous language should not be “censored,” but countered with “better speech.”

But racist views and hateful beliefs are not solved by having an open discussion. Making these ideas unpalatable requires having societal consequences for those who hold them. We do not want to have a discussion with pedophiles as to whether child pornography should be legalized. We want to make the idea taboo.

And lest you think the example is extreme: On social media sites that do not regulate discussion, even child pornography can become normalized. As has been proven time and again, when hate speech flows on social media, violence follows. The issue is not that we are being too heavy-handed in dealing with hate speech. It is that our culture and institutions, including social media companies, are not consistent in dealing with it.

Antisemitism is not solved through low expectations

Stewart told Colbert that the people who have been recently getting attention on the national stage for their antisemitic remarks have been Black men: West, Irving and Chappelle.

Jon Stewart’s approach to this difficulty was to minimize it, and to quote, of all people, Kanye West: “‘Hurt people hurt people.’”

He went on to say, “Look at it from a Black perspective. It’s a culture that feels its wealth has been extracted by different groups. Whites. Jews. Things. Whether it’s true or not isn’t the issue. That’s the feeling in the community.”

What sounds like an attempt at empathy is actually its own form of racism: the belief that Black people as a whole are, and have a good reason to be, antisemitic. As Soraya McDonald, senior culture critic for Andscape, a Black-led media platform put it, “He basically advanced the false and ahistorical idea that Black people are generally antisemitic.”

Stewart’s mischaracterization of Black people was problematic in another way. It erased Black Jews. As Shawn C. Harris, author and a vocal commentator on Black Jewish issues told me, “ He effectively perpetuated the notion of Black and Jewish being separate communities and identities.”

When influential people like Stewart speak over Black Jews as if they don’t exist, it means they are left with, in Harris’s words, “the burden of pushing back against antisemitism disguised as being pro-Black and antiblackness disguised as fighting antisemitism.” Stewart’s comments only further effaced Black Jewish identity.

Stewart’s interview, then, largely just spread further misinformation. He equated celebrities with massive platforms and cultural influence with stray internet trolls. He advocated that hate speech go unaddressed under the banner of free speech. And he further perpetuated racism and erasure of Black Jews.

The result was normalization of both antisemitism and racism — a shonda.

The post Jon Stewart is not our ‘spokesJew’ — he normalized hate speech appeared first on The Forward.