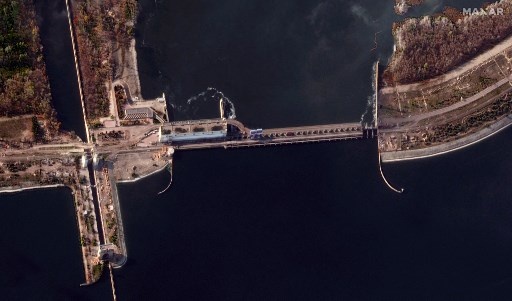 As Kyiv and Moscow redeploy forces and seek new objectives following the Armed Forces of Ukraine’s (AFU) liberation of the city of Kherson last week, a hydroelectric dam and the towns around it are already a new focus for fighting and, possibly, the scene of a surprise AFU crossing of the Dnipro River.

The main road and rail link across the Dnipro inside Kherson city was blown up by Russian Federation (RF) military engineers, who on Friday, Nov. 11 used det charges to drop multiple spans of the Soviet-era Antonovsky bridge into the 700-meter wide river. The controlled explosions took place early in the morning after the last thousands of retreating RF troops completed a total withdrawal from defensive positions on the northern, right bank of the river.

But Nova Kakhovka Hydroelectric Station’s causeway, some 50 km to the north-east, and upstream of Kherson, suffered comparatively little damage. Russian demolition teams there blew up three bridge spans near the right-bank village of Vesele but otherwise left the rest of the bridge, and all of the reinforced concrete and packed earth causeway on either side, effectively intact.

Images published by the U.S. satellite imagery firm Maxis on Nov. 11 showed a 45-meter gap which, on Nov. 16, a British Defence Intelligence update said made the dam impassible to all traffic. The nearest road and rail link over the Dnipro still standing is in Zaporizhzhia, some 180 km. further upstream.

For an offensively-minded AFU looking to move south and press its attack against retreating RF forces, officers in the southern sector told Kyiv Post that the Nova Kakhovka causeway has possibly become the most critical terrain, right now, along the entire fighting front in Ukraine. The AFU is well-equipped with assault bridges and construction engineers, they said, so if the Ukrainian army were to take control of the immediate vicinity, and push the Russians out, the gap could be spanned in hours.

The AFU has slapped a blanket ban on news reports from the region, citing a need to protect the security of ongoing operations. A Nov. 15 statement from the AFU’s Joint Forces South (JFS) confirmed strikes were in progress and that the AFU’s main objectives at present are the destruction of RF troops and ammunition depots. There was no mention of river crossings or ground fighting around Nova Kakhovka.

The RF-supporting CGTN television channel reported Nova Kakhovka is “the new epicenter” of the front and that shelling is constant, while the Moscow state-run RIA Novosti agency, on the morning of Nov. 15, published images of a masked soldier informing that Nova Kakhovka is absolutely quiet, power supplies are stable, and that shops are open. This was contradicted by the local news aggregator Nova Kakhovka City, which reported two precision AFU strikes in a forest near the city, destroying two RF ammunition bases.

According to social media accounts from local residents, small numbers of Russian troops remained in Nova Kakhovka after the bridge was blown up, but it did not seem like they were planning to stay. The blogger #novakakhovka_ua reported RF conscripts were searching for civilian automobiles to escape, that the city was mostly empty of RF troops, and that shellfire was continuous.

Multiple images appeared in Ukrainian social media on Nov. 16 of Nova Kakhovka town hall and a Russian flag purportedly torn down from the building’s flag pole, as well as unconfirmed accounts of AFU reconnaissance troops on the outskirts of the city. Some posters speculated Ukrainian troops were not just patrolling but had taken control of both ends of the causeway, and that RF forces in the vicinity were retreating. There was no official confirmation of this.

Anatoliy Shariy, a pro-Russia blogger with a reported 1.8 million followers likewise predicted in a Nov. 15 Telegram post a gradual but unstoppable Ukrainian military push across the Dnipro River to capture the crossing and liberate major cities to the South: “We (RF citizens) know the tradition. If they (the AFU) don’t take it with a fight today, they’ll take it without a fight tomorrow…The fate of these places is sealed. Kakhovka, Nova Kakhovka, in the other direction Berdyansk (the UAF advantage) is very powerful and soon, Melitopol.”