When Joe Biden’s eldest granddaughter, Naomi Biden, 28, marries her fiancé, Peter Neal, 25, on the South Lawn of the White House on Saturday, many attendees will likely be reminded that Naomi played an important role in Joe Biden’s journey to the Oval Office.

Naomi is the Biden grandchild who called a family meeting in 2019, when Joe Biden was still dithering on whether to run against Donald Trump. Naomi and her two sisters, Finnegan and Maisy, as well as their cousins, encouraged Biden to announce his candidacy to challenge Trump. That meeting, which has since become another well-worn part of Biden family lore, was an important moment for Joe Biden, who had been hesitant to toss himself and his family back into the spotlight of a national campaign without having them on board.

The President—or “Pop” as his grandkids call him—will attend his granddaughter’s wedding during a surge of optimism in his inner circle. The Democrats beat expectations in the midterm elections, expanding their narrow majority in the Senate, and losing the House by a slimmer margin than many had predicted. Advisors close to the President believe the results vindicate his measured approach to the job, presiding over major investments in infrastructure and technologies to stave off climate change, sounding the alarm about threats to democracy, and working to unite allies against common threats from Russia and China overseas. The day after the wedding, Joe Biden will celebrate his 80th birthday.

The wedding is the first wedding festivities at the White House since 2008, when Jenna Bush and Henry Hager held their wedding reception there, after saying their vows at a ceremony on the Bush family ranch in Crawford, Texas. The cases of wedding ceremonies held at the White House are ever rarer. Hillary Clinton’s younger brother Tony Rodham married Nicole Boxer at the White House in 1994. Tricia Nixon, President Richard Nixon’s daughter, tied the knot in the Rose Garden in 1971.

Naomi Biden’s event is being orchestrated by Bryan Rafanelli, the celebrity wedding planner who put together Chelsea Clinton’s wedding in 2010. The wedding costs are being paid by the Bidens, said Elizabeth Alexander, communications director for First Lady Jill Biden. “Consistent with other private events hosted by the First Family and following the traditions of previous White House wedding festivities in prior Administrations, the Biden family will be paying for the wedding activities that occur at the White House,” Alexander wrote in a statement.

Who is Naomi Biden?

Naomi, the eldest daughter of Hunter Biden and his former wife Kathleen Buhle, graduated from Columbia Law School in 2000 and is an international arbitration associate at the law firm Arnold & Porter. Her fiancé Peter Neal grew up in Jackson Hole, Wy. and was an intern in the Obama White House in 2015 when Joe Biden was the Vice President. Neal worked on Hillary Clinton’s 2016 presidential campaign and graduated from University of Pennsylvania Carey Law School in 2022, and now works as an associate at Georgetown Law’s Center on National Security. The couple met in 2018 through mutual friends, and routinely attended public events together during Joe Biden’s 2020 presidential campaign. Peter proposed to Naomi in September 2021 in Jackson Hole. 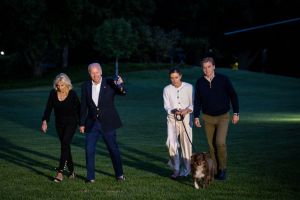 Public interest in weddings held at the White House has shifted since the country’s founding. Initially, White House weddings were small, private affairs, says Lina Mann, a historian at the White House Historical Society. “That sort of changes as the idea of celebrity in the White House shifts over time,” Mann says. The first closely watched White House wedding was when the daughter of President Ulysses S. Grant, Nellie Grant, was married in 1874 to Algernon Sartoris, The couple were married in the East Room of the White House which was bedecked in white flowers. Adding to the interest in the event was that Grant himself was an international celebrity after his battlefield leadership in the American Civil War, newspapers were ramping up circulation, and photography was a relatively new technology that brought images of the bride and groom across the country.

The only sitting president to get married at the White House was Grover Cleveland, who in 1886 married Frances Folsom, the 21-year-old daughter of his former law partner. Cleveland was 48 years old at the time.

Using a saber to cut the cake

There isn’t much of a playbook for how a White House wedding is supposed to be conducted, Mann says. “Each wedding is really personal. There is not a lot of tradition that carries through to each wedding. Each one is sort of personal to whoever’s getting married and the family of whoever’s president at the time,” says Mann. When Teddy Roosevelt’s daughter Alice Roosevelt was married in 1906, she cut her wedding cake with the sword of a military aide. Alice Roosevelt was a guest at the White House decades later, when President Lyndon Johnson’s daughter Lynda Bird Johnson was married in 1967 and Lynda used her husband Charles Robb’s Marine Corps saber to cut their wedding cake.