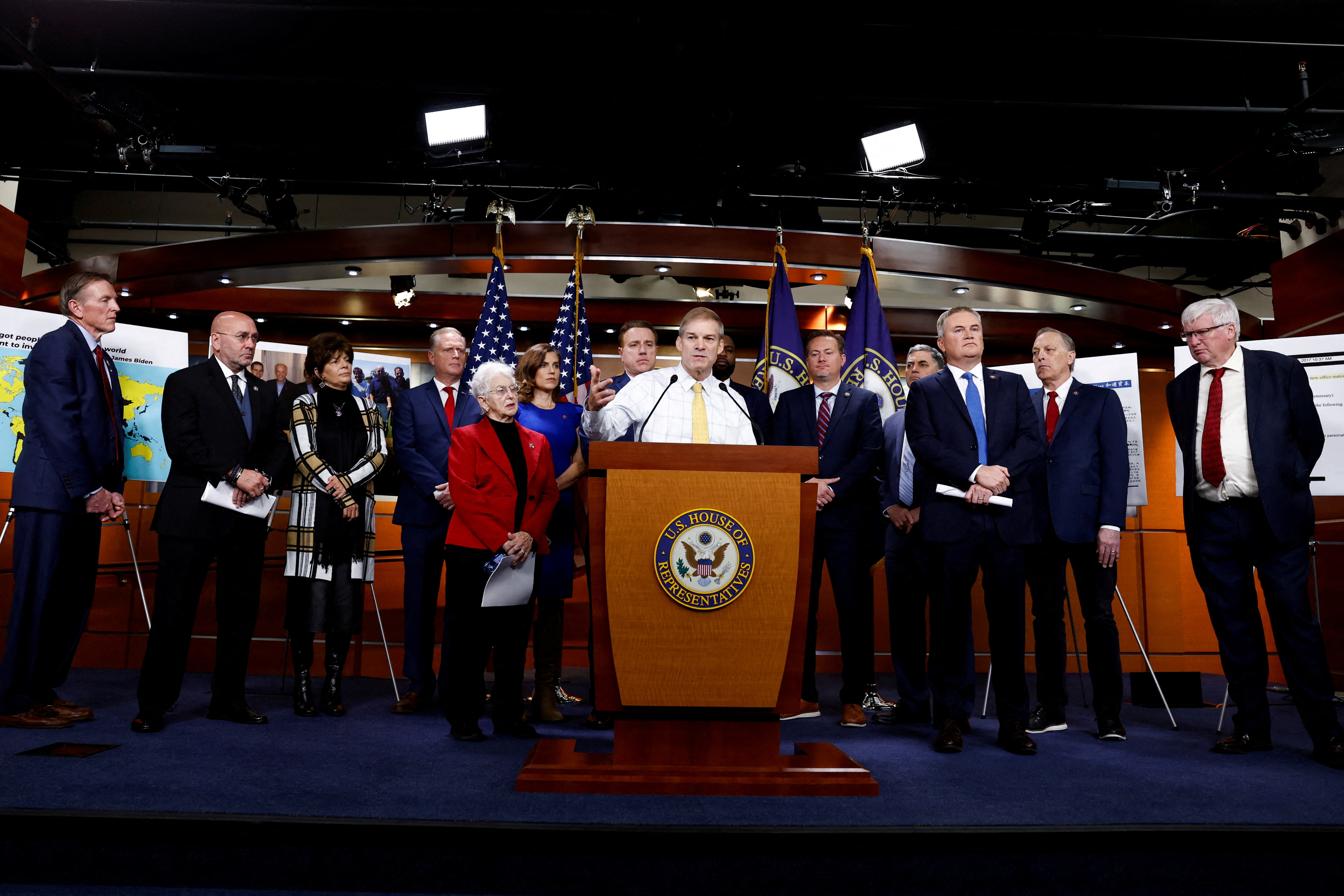 U.S. Rep. Rep. Jim Jordan (R-OH), ranking Republican on the House Judiciary Committee, is flanked by fellow House Republicans as he discusses the investigation into the Biden family’s business dealings during a news conference at the U.S. Capitol in Washington, U.S., November 17, 2022. REUTERS/Evelyn Hockstein/File Photo

Republicans in the U.S. House of Representatives on Friday identified 42 employees from Democratic President Joe Biden’s White House and administration, who they expect to testify next year after their party takes control of the chamber.

In Nov. 18 letters to White House Chief of Staff Ron Klain and other top administration officials, 19 Republican members of the House Judiciary Committee said they need testimony on issues including border security, school board threats and claims of bias within the FBI and Justice Department.

There was no immediate response from the White House.

“We expect your unfettered cooperation in arranging for the Committee to receive testimony,” the Republicans, led by incoming committee chairman Jim Jordan, wrote in a letter to Klain.

The letters represent the House Judiciary Committee’s first request for testimony and documents since Republicans won a narrower-than-expected House majority on Wednesday.

Testimony could be taken in hearings or transcribed interviews, the lawmakers said.

Jordan, a hard-line conservative and staunch ally of former President Donald Trump, told reporters on Thursday that claims of political bias at the FBI and Justice Department would be a major focus of investigation for his panel.

Trump was impeached twice by Congress under Democrats, once over allegations of pressuring Ukraine President Volodymyr Zelenskiy to investigate Biden and his son ahead of the 2020 presidential election, and once over the Jan. 6, 2021, assault on the U.S. Capitol.

Angered by the FBI seizure of classified documents from Trump’s Florida home in August, Republicans accuse the Biden administration of politicizing the FBI and Justice Department.

They also said U.S. law enforcement has targeted parents opposed to school COVID-19 mandates and blame Biden for a flood of migrants across the U.S.-Mexico border.

On Thursday, the incoming Republican chairman of the House Oversight and Reform Committee said his panel would make investigating Biden and his family’s business dealings its top priority.

The Judiciary and Oversight probes are expected to be among a raft of Republican investigations into Biden and his administration next year. The list of investigatory topics also includes China, the origins of the COVID-19 pandemic and Biden’s chaotic withdrawal of American troops from Afghanistan in August 2021.