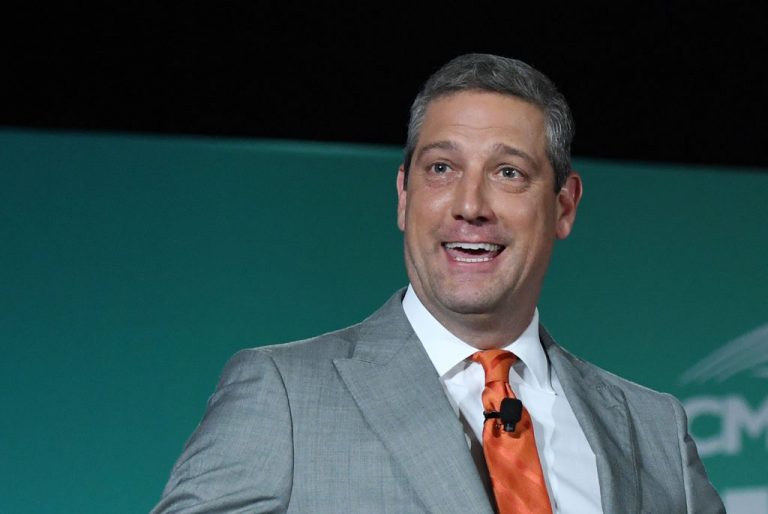 A senior staffer from Rep. Tim Ryan’s (D., Ohio) Senate campaign told the Atlantic in May that the candidate only had a shot at winning if President Joe Biden’s approval rating in Ohio was above 42 percent on Election Day. Since that article was published, not a single poll had Biden’s approval above 41 percent.

But that didn’t stop mainstream media journalists from pitching Ryan as the kind of culturally conservative Democrat who could pull off an upset in November. Without presenting evidence that he had any broad appeal in his home state of Ohio, article after article characterized him as the type of Democrat who had a playbook for success in a red state.

Politico declared Ryan the “Democrats’ best messenger on the economy,” and Time magazine lauded his ability to channel both Bobby Kennedy and Ronald Reagan on the trail. Ryan had “blue-collar credibility,” in the words of the New York Times, and was winning over voters with an “appeal to unity in these fractured times.” Ryan was “the perfect test case of whether somebody can bridge the gap between Democrats’ moderate and progressive wings,” according to the Wall Street Journal.

That kind of treatment likely led small-dollar Democratic donors around the country to believe Ryan possessed the secret formula to pull off an upset. Ryan successfully rode his army of small donors to a 400 percent cash advantage over his Republican challenger J.D. Vance. Ryan managed to raise more money than other Democrats who would end up losing their races by far smaller margins, such as Mandela Barnes in Wisconsin and Cheri Beasley in North Carolina. Ryan even raised more than the Democratic Congressional Campaign Committee and the Democratic National Committee.

Kyle Kondik, the managing editor of University of Virginia’s Crystal Ball and author of The Bellwether, a book about Ohio politics, said the praise from mainstream media outlets attracts donations from their readers.

“I think Ryan probably got a lot of credit for the quality of the campaign he ran before the results actually came in,” said Kondik. “If you look at who reads these kind of publications, they tend to be affluent and highly educated and willing to give money.”

Down the stretch, Ryan was soaking up Democratic donations. In the first half of October, Ryan received $8 million in contributions through ActBlue, the Democratic Party’s premier fundraising platform. Ryan was the third-largest recipient during that time period. Ryan ultimately lost Ohio by around 7 percentage points, a significantly larger margin than that by which Barnes lost in Wisconsin, where Democrats came just within 1.5 percentage points short of unseating incumbent Republican senator Ron Johnson. Beasley in North Carolina, a state that former president Donald Trump won twice, lost by 4 points.

It’s impossible to say what either would have done with more money, but in hindsight, strategists say Ryan’s campaign wasn’t the best place for such a large share of Democratic donor money.

“I think in any race where a lot of money is raised, and that candidate loses by a margin like Tim Ryan, you can see it as costing other candidates in closer races,” said Ohio political strategist Mike Hartley. “Despite what we may think, money is finite in campaigns. There is only so much to go around, but liberal donors have developed a reputation for donating with their feelings and ignoring reality.”

One individual close to Vance’s campaign said Ryan’s tremendous online funding apparatus amounted to an “own goal” for Democrats. Ryan’s massive campaign war chest came at the expense of other candidates who had a better shot at winning, the individual said.

“ActBlue is a great source of money, but it forces candidates to say unpopular things and it empowers liberal media figures to play gatekeepers to small-dollar donors,” said Luke Thompson, who ran a pro-Vance super PAC.

“Democratic donors sunk money into a white mediocrity who underperformed like Ryan instead of two black candidates,” Thompson said.

Ryan did enjoy a string of good polls in the summer, at times tying or leading Vance, but election prognosticators consistently kept the state in the Republican column. The reality that the media presented to voters, however, was that the state was a pure tossup up until Election Day.

Despite momentum moving in Vance’s favor by October, the media recommitted itself to the narrative that Ryan was poised to pull off a shocking win. The Times said Ohio was “the country’s unlikeliest Senate battleground” and just five days later said that “Democrats predict an upset” in the state.

The media played up the race’s competitiveness by highlighting Vance’s fundraising struggles, which were very real. But Vance’s paltry fundraising numbers over the summer—in July, his Senate campaign account was disastrously low, with several outlets labeling him “broke”—prompted Senate Minority Leader Mitch McConnell’s (R., Ky.) Senate Leadership Fund in August to pour nearly $30 million into his race. McConnell’s move drove the media-feedback loop that the Ohio Senate race was a tossup. As Politico declared that month, Ryan “turned his race into a surprise Senate battleground.”

By early September, however, McConnell’s team thought Vance was, as one individual close to the group’s spending said, “in good shape.” Internal polling showed the race was not likely competitive at that point. One Republican operative close to the Senate Leadership Fund predicted a victory of at least 7 points, which turned out to be within a half point of the actual margin.

By the end of October, Vance led in six of eight polls. But on Nov. 3, the same day a poll found Vance leading by 6 points, Politico said Ryan was running a “surprisingly competitive” campaign.

The coverage of Ryan as a uniquely moderate Democratic candidate was also far from reality. Bloomberg News, in a story that gushed over Ryan’s background as “a quarterback in high school” whose “grandfather was a steelworker for 40 years,” said that Ryan often “breaks with Biden.” The story failed to mention that the congressman votes with the president 100 percent of the time.

As the Washington Free Beacon documented, Ryan’s record was indistinguishable from the average left-wing Democrat. He supported Medicare for All, free college, eliminating gas cars and fracking, releasing large amounts of criminals from prison, and cutting Immigration and Customs Enforcement’s budget.

Even after his loss, Ryan remains a media darling. The day after his loss, MSNBC reporter Chris Jansing said that a “top Democrat” had high hopes for Ryan’s political future: “Watch for Tim Ryan years in the future to run for president.”

Ryan already has run for president, though he didn’t even make it to the Iowa caucuses. Ryan’s spokeswoman did not respond to a request for comment about Ryan’s future plans.

The post How the Media Boosted Tim Ryan and Hurt Other Dems in the Process appeared first on Washington Free Beacon.