Conspiracy theorist Alex Jones on Tuesday failed in his bid to slash a nearly $50 million defamation verdict against him over his false claims that the 2012 Sandy Hook mass shooting was a hoax.

Judge Maya Guerra Gamble rejected arguments by a lawyer for Jones and the parent company of his Infowars website that a Texas state law capping certain types of damages meant that the August verdict in favor of two parents of a child slain at Sandy Hook should be cut by more than $40 million.

Jones claimed for years that the 2012 killing of 20 students and six staff members at Sandy Hook Elementary School in Newtown, Connecticut, was staged with actors as part of a government plot to seize Americans’ guns. He has since acknowledged the shooting occurred.

Plaintiffs Neil Heslin and Scarlett Lewis testified that they suffered years of harassment and abuse at the hands of Jones’ followers, who falsely believed they lied about their six-year-old son Jesse Lewis’ death.

Texas law caps non-economic punitive damages, which made up $45.2 million of the total verdict. Heslin and Lewis’ lawyers successfully argued that the cap does not apply due to a carveout for intentional abuse of a disabled person, saying trauma over their son’s death counted as a disability.

“Our clients are pleased that the jury’s verdict was upheld in totality and my remaining clients look forward to closing out this vile chapter of American history by continuing to hold Mr Jones accountable,” Heslin and Lewis’ attorney, Mark Bankston, told Reuters after the hearing in Travis County District Court in Austin, Texas.

Jones’ attorney, Andino Reynal, said the ruling contradicts “decades of precedent” and that he will appeal.

In October, a Connecticut jury in a separate case brought by relatives of more than a dozen Sandy Hook victims ordered Jones and his company, Free Speech Systems LLC, to pay nearly $1 billion in damages.

The judge in that case tacked on an additional $473 million in punitive damages for Jones’ “cruel” conduct earlier this month.

Evidence in both cases showed that bogus Sandy Hook claims turbocharged traffic to Infowars and drove sales of its products, including supplements and doomsday supplies.

Lawyers for the plaintiffs argued that Jones and his company knew that victims’ families were being harassed but continued to spread falsehoods about the shooting because it was profitable.

Free Speech Systems declared bankruptcy in Texas in July. The Sandy Hook families have intervened in the case, alleging Jones is using the proceedings to shield his assets and avoid paying.

The families have also sued Jones in Texas court seeking to unwind transactions that they said allowed Jones to loot millions of dollars from his company and stash them in shell entities ahead of potential judgments against him.

Another defamation lawsuit against Jones brought by Sandy Hook parents is set to go to trial in Austin, Texas, in March. 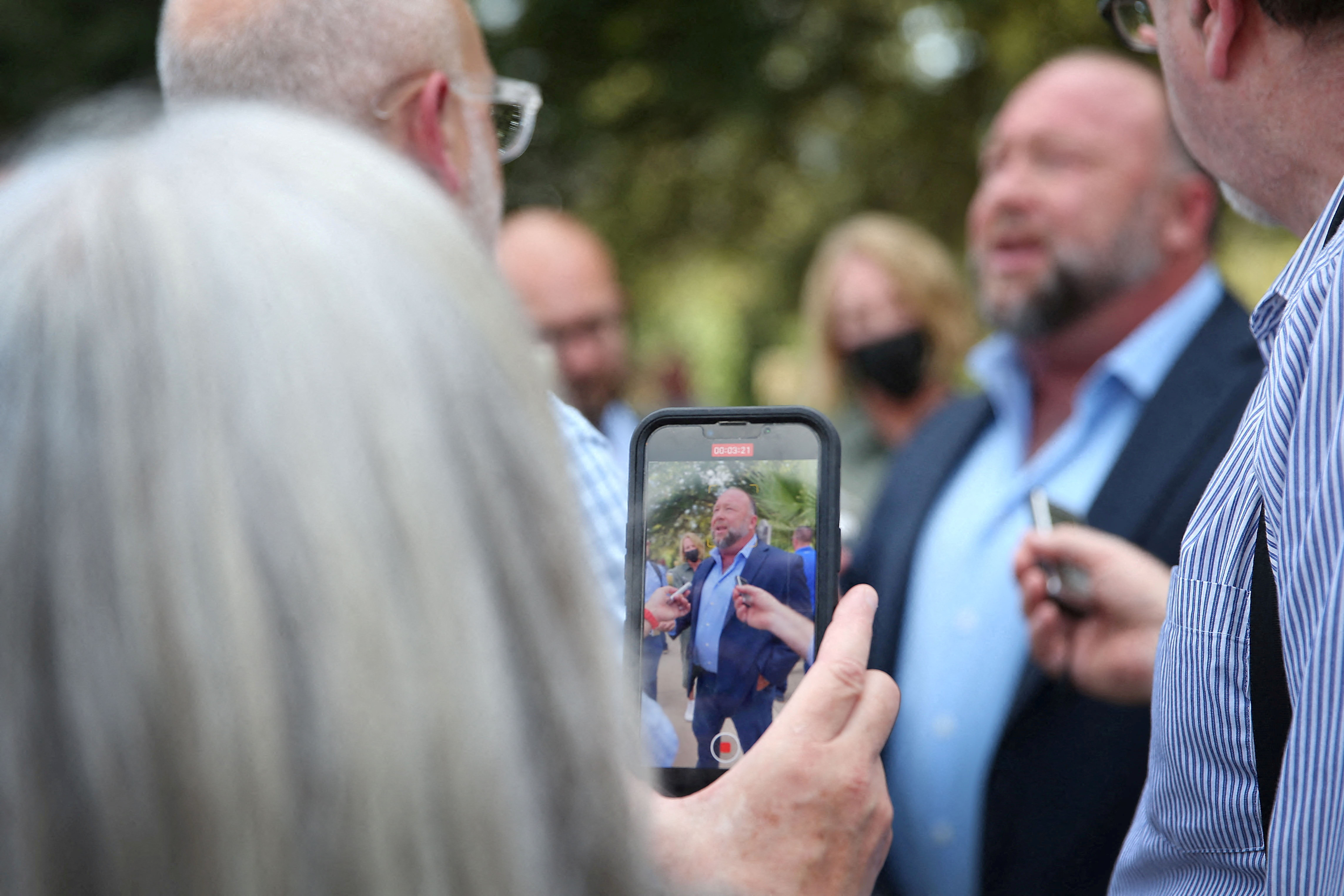 Alex Jones steps outside of the Travis County Courthouse, to do interviews with media after he was questioned under oath about text messages and emails by lawyer Mark Bankston, in Austin, Texas, U.S. August 3, 2022. Briana Sanchez/Pool via REUTERS/File Photo 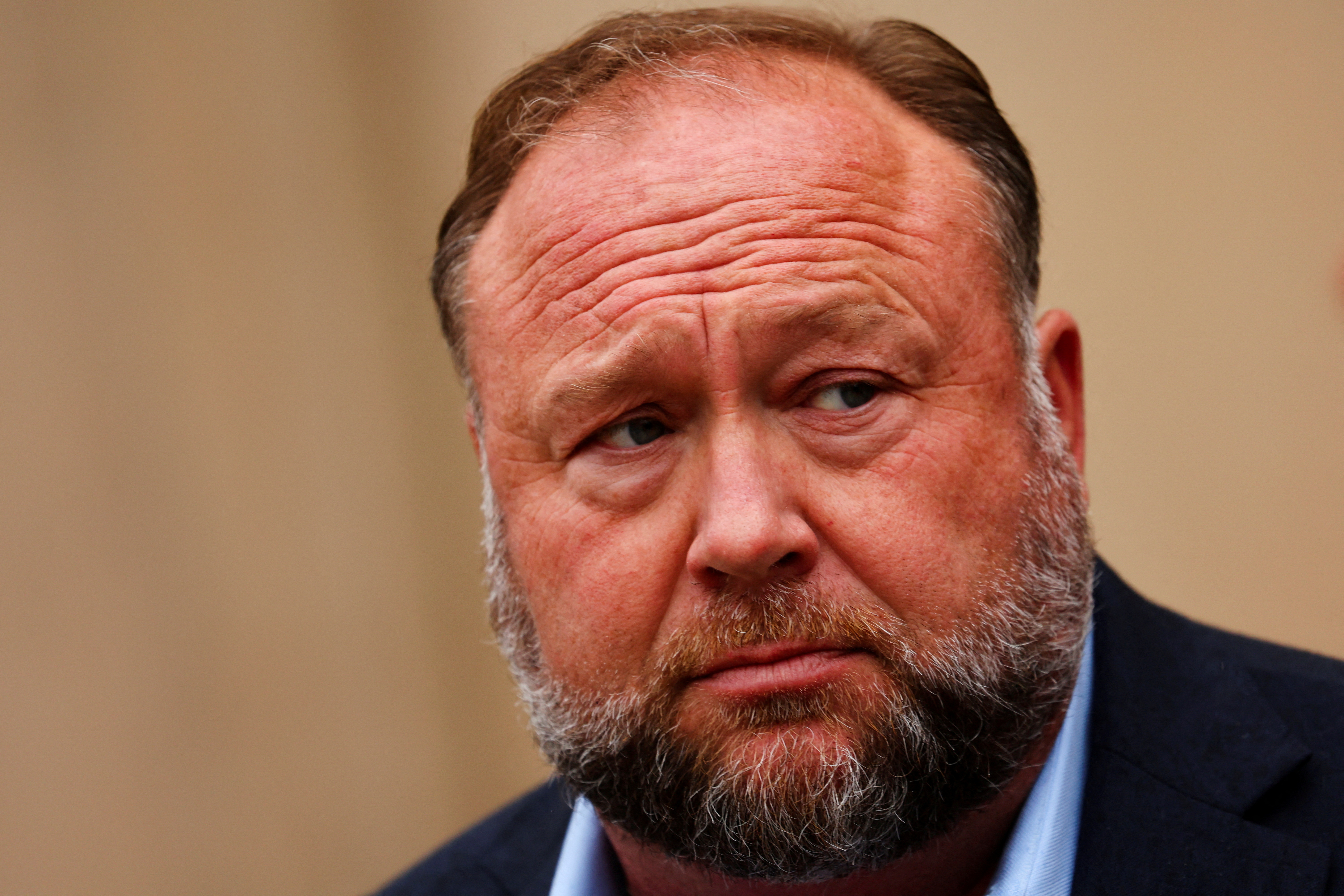