Editor’s note: This piece was originally published in 2016.

The first Thanksgiving I spent in America, the banking system foreclosed on me. On my third Thanksgiving, my girlfriend of a year dumped me. On the fourth, I nearly died of an asthma attack in a Nashville basement.

Since those disasters, I’ve avoided relying on banks, my health or loved ones, but that didn’t stop me from spending 20 hours of Thanksgiving 2007 in transit to or from the airport, or just in plain residence at La Guardia waiting for a plane to arrive from some putative storm in Chicago.

So that’s why I’m not disposed to give thanks, personally. But why, apart from our shared grumpiness, should you care?

Well, I think you should care about the crass hypocrisy of contemporary America in its embrace of the secular myth of Thanksgiving. Apart from its noble job of acting as a tentpole supporting consumer demand between Halloween and Chrismukkah, what is its purpose? 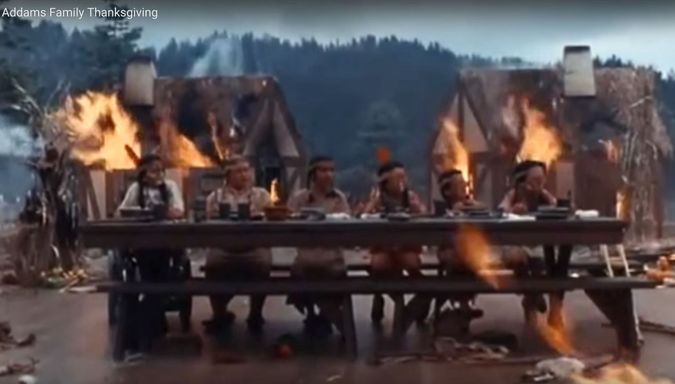 My source text for understanding this peculiar American holiday is the authoritative documentary “Addams Family Thanksgiving” (1993). Here’s how it goes: Some white Christian folk arrived on the East Coast, refugees from religious persecution. They weren’t great farmers so the local indigenous people reached out to help. In a triumph of ahistorical blindness, America munches its turkey and candied yams to echo that legendary dinner of venison and corn while forgetting about the campaigns of biological warfare carried out by Lord Jeffrey Amherst and others against those indigenous tribes, as well as the many broken treaties with other Native Americans.

As Wednesday Addams puts it on behalf of the local sovereign peoples:

Then, despite the history of persecution that the settlers were fleeing, they or their descendants founded a nation that has an undistinguished history of slavery, racism and religious intolerance. Thanksgiving is less a celebration of unity than a reflection of historical revisionism and an inflection point from which the religiously persecuted could become the ethnic, religious persecutors. This is not an amnesiac point that I, as a Jew, identifying ethnically and religiously, want to celebrate.

Plus, if this is the American Sukkot — a post-harvest festival of thanks — we can celebrate in 2017 the election of a president who thinks that climate change is a hoax and that we should register all the Muslims who live in America. So if there are thanks to be given, perhaps we can fit in a moment or two among the smug carbohydrates and concussive college football to celebrate the final days of our fragile natural and social ecosystems.

That first year, I was a student short of cash but, after asking my dad to wire me some money from my U.K. account, I went to Washington, D.C., to see a friend. I knew that, before the English money arrived, I had $100. So I went to an ATM to take out $60. It didn’t dispense the first time so I went to another machine. But a broke Thanksgiving week and many anxious phone calls later (of course the bank was closed the whole long weekend), it transpired that the ATM had told the bank that I had taken all my money out. So the bank decided to close my account. And to close it before the money from England, sent days before on very slow wires, arrived. And to do so without telling me.

That bank, by the way, had been named for a Native American tribe in what is now known as New England. But it was swallowed up by Bank of America — one of the major villains of the subprime mortgage scandal. The impersonal incompetence of the Bank of America nearly ruined my experience of Washington, D.C. — an experience that was saved only by the generosity of my friend lending me money and providing me with hospitality. Yes, that’s right, the only bright spot of my Thanksgiving experience came from a swarthy foreigner from the Middle East and a prospective immigrant.

I’m sure there’s a metaphor there, but I’ll leave it for you as a puzzle to accompany the cranberry sauce (which, despite its profound environmental cost, I love).

The post Why I detest Thanksgiving — and you should, too appeared first on The Forward.