Listen to this article
2022-12-01T01:46:01Z
France’s President Emmanuel Macron warned of the possible dangers in space as he met with U.S. Vice President Kamala Harris on Wednesday (November 30) at NASA headquarters in Washington, D.C.

French President Emmanuel Macron addressed U.S. lawmakers from both political parties on Wednesday and pushed back over new American subsidies that are riling European leaders, according to a participant in a closed-door meeting.

Macron arrived in Washington on Tuesday for his second state visit to the United States since taking office in 2017, ahead of which French officials said he would confront President Joe Biden over the subsidies contained in the Inflation Reduction Act (IRA).

Biden and Macron, joined by their wives Jill and Brigitte, took an early opportunity to get together ahead of their formal talks on Thursday. They rode in the U.S. presidential motorcade a short distance from the White House to the historic area of Georgetown and dined at Fiola Mare, an Italian restaurant.

In a meeting with U.S. lawmakers at the Library of Congress, Macron said the Inflation Reduction Act was “super aggressive” toward European companies, one participant told Reuters. The participant requested anonymity to discuss a private part of the meeting.

Macron’s office declined to confirm the comment, which was first reported by Agence France-Presse.

European leaders have complained about the legislative package, signed by Biden in August, that offers massive subsidies for U.S.-made products, which they say unfairly disadvantages non-American companies and would be a serious blow to their economies as Europe deals with the fallout from Russia’s February invasion of Ukraine.

The IRA has provisions that will contribute to the growth of the clean energy sector globally, she added.

In introductory remarks at the Library of Congress with reporters present, Macron said France and the United States should join forces to reform the International Monetary Fund and the World Bank so their funds can be directed to countries hit by climate change.

After Republicans won the House of Representatives in this month’s mid-term elections, Macron’s efforts to reach out to both parties was a recognition he must look beyond Biden, a Democrat, to advance cooperation with Washington, French official say.

Macron is the first foreign leader to be given a state dinner at the Biden White House, a sign of his importance to Washington despite some differences with the Biden administration. The formal dinner on Thursday will feature music from Jon Batiste, Chardonnay from the Napa Valley and cheddar cheese from a family-run creamery in Sheboygan, Wisconsin, according to details provided by the office of first lady Jill Biden.

Macron said space represents “a new place of conflict” and that it was important for France and the United States to work together on setting rules and norms because they share a commitment to science as well as democratic values.

“We have crazy players in space as well, and we have rogue states there and we have new hybrid attacks,” Macron said, speaking in English.

The United States, which last demonstrated such a missile in 2008, first announced its ban on the tests in April.

Macron’s visit came as NATO ministers met in Bucharest and pledged more aid to Ukraine to help against Russia’s attacks on energy infrastructure as winter bites.

The alliance, of which the United States and France are founding members, was also discussing how to address challenges posed by China’s military buildup and its cooperation with Russia, U.S. Secretary of State Antony Blinken said. Macron has said in the past that China should not be a focus for NATO.

White House national security spokesman John Kirby told reporters on a briefing call that China would top the agenda during Macron’s visit “because of the global influence that China is trying to exude and demonstrate and because of the security challenges that China continues to pose, particularly in the Indo-Pacific region.” 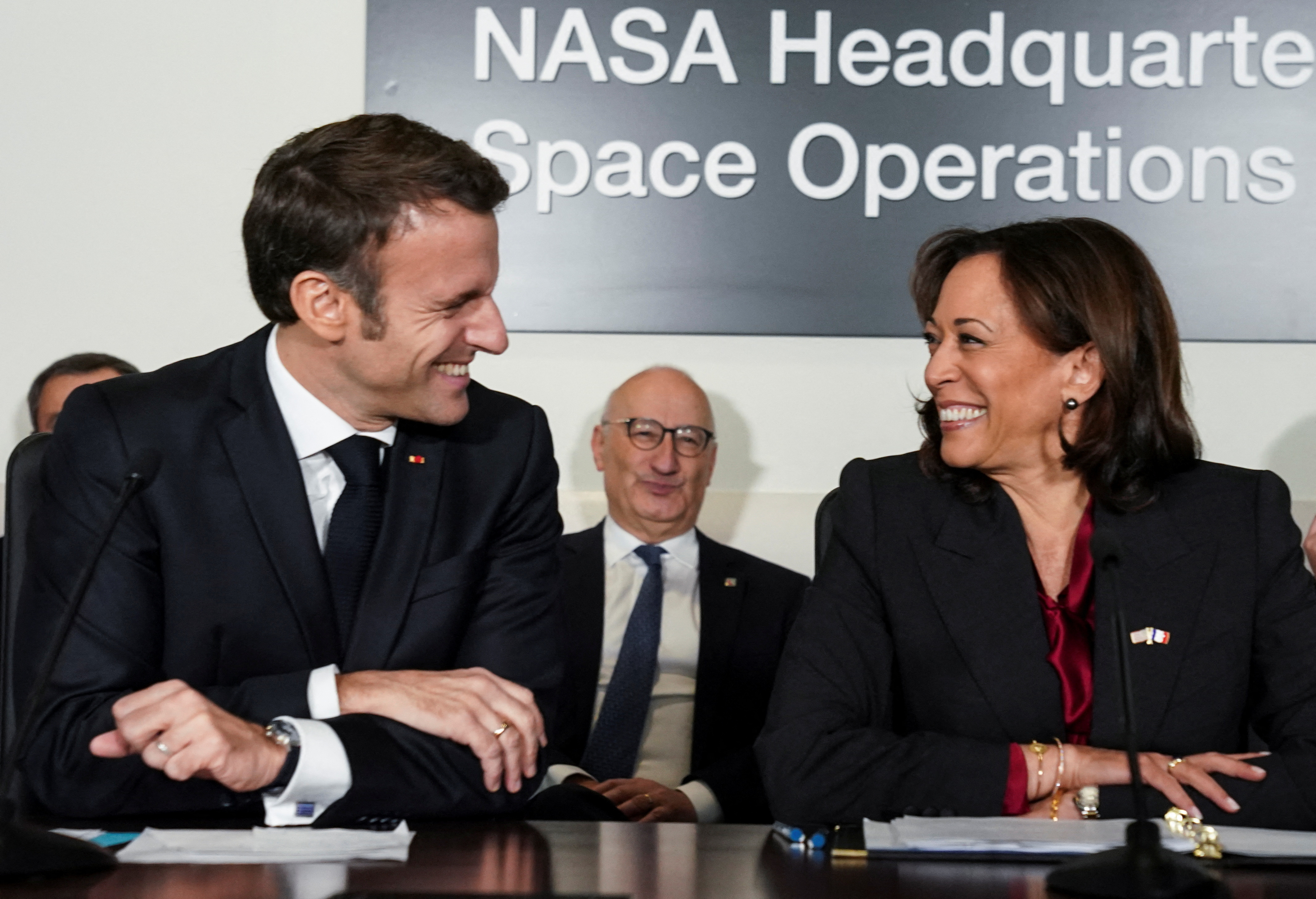 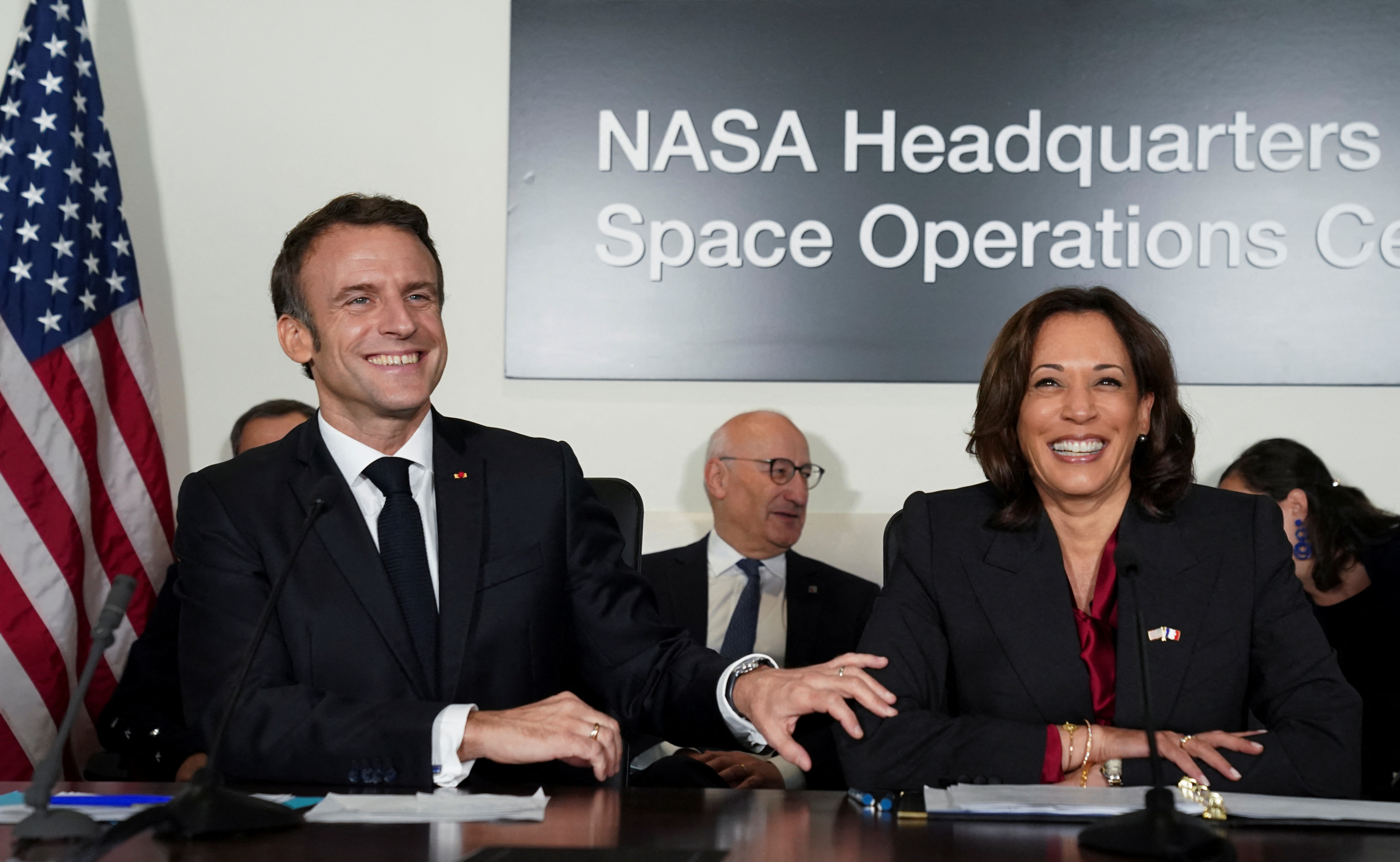 French President Emmanuel Macron reaches out to U.S. Vice President Kamala Harris as they hold a briefing during a visit to NASA headquarters in Washington, U.S., November 30, 2022. REUTERS/Kevin Lamarque 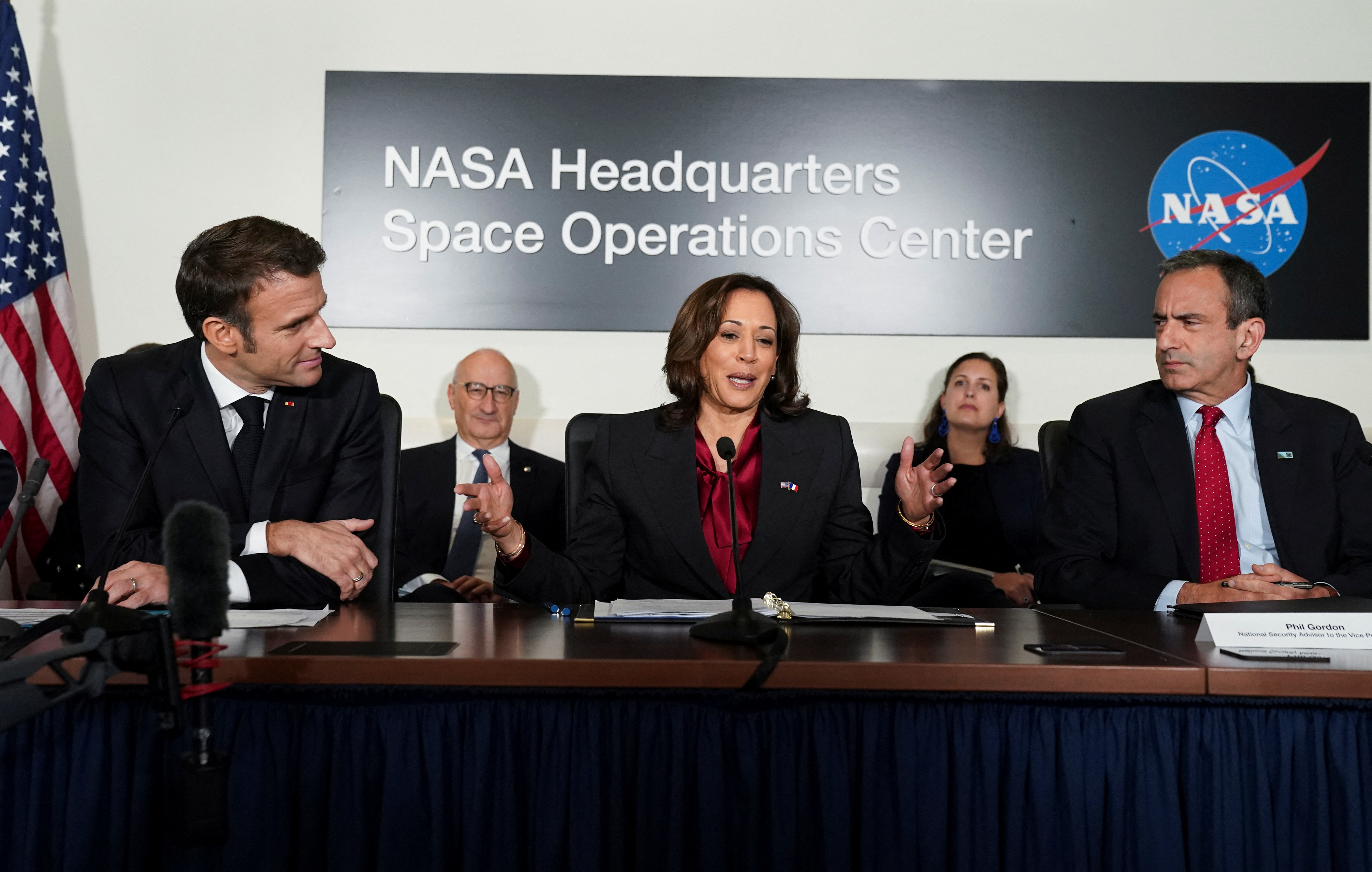