It’s an age-old question: If you could choose who would play you in a movie, who would you pick? Michael Ausiello, author of Spoiler Alert: The Hero Dies, got to make this choice for the adaptation of his memoir, and he went with Jim Parsons. Ausiello tells TIME that the choice dates back about five years when he asked the actor and producer known for The Big Bang Theory and The Boys in the Band to moderate a Q&A at The Grove in Los Angeles in September 2017—the week his moving memoir came out. Parsons said yes without even having read the book.

Before they got in front of the audience, Parsons said he would like to option the book to be made into a movie with the production company he runs with his husband, Todd Spiewak. “It felt like a tremendous confidence boost to me when I needed it most,” Ausiello says. “This was the week the book was coming out, and I didn’t know how it would be received. I was in a vulnerable place.”

In the book, Ausiello recounts his relationship with his late husband, Christopher “Kit” Cowan, who died in 2015 from colorectal cancer, a rare neuroendocrine cancer. The memoir details the ups and downs of their relationship, Cowan’s cancer diagnosis and treatment, and Ausiello mourning the loss of the love of his life. Parsons was “connected to the story,” Ausiello says. “When he was reading the book, he was surprised at how similar the course of my relationship [was compared to his relationship] with Todd. He just saw a lot of parallels there.” 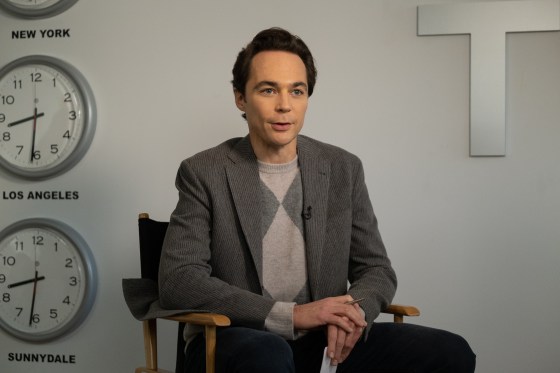 Read More: Jim Parsons Is So Much More Than Sheldon

Spoiler Alert: The Hero Dies was well received, with multiple publications touting its well-balanced mixture of humor, grief, and loss. “The ending is given away in the title, but the experience of reading it is something wholly unexpected,” the Daily Beast wrote in a review. It also received over 5,000 five-star reviews on Goodreads.

Five years after that initial conversation with Parsons, the actor and producer’s idea has come to fruition, and a feature film based on Spoiler Alert, with Parsons playing Ausiello and Ben Aldridge (of Pennyworth and Fleabag fame) playing Cowan, hits select movie theaters on Dec. 2 before being released nationwide on Dec. 16. The movie is just as moving as the book, if not more so, with director Michael Showalter bringing both the humorous and the poignant lines of text to life onscreen.

Ausiello tells TIME that the team—screenwriters David Marshall Grant and Dan Savage, along with Showalter—welcomed his involvement and allowed him to be a part of every step of the movie-making process. Ausiello, a TV journalist by trade and creator of the website TVLine, says the details he was most scrupulous about were which TV shows Michael in the movie would be obsessed with and should be referencing. He remembers suggesting Felicity and Gilmore Girls: “Those weren’t necessarily what was scripted out of the gate, but I felt that we should be faithful to the story in those cases.”

He adds, “I think what people respond to in the book is the little things, the details, and the specifics of the relationship that Kit and I shared. Everything from my Smurf collecting to my Diet Coke obsession and my body issues. I felt like the story benefited from that authenticity.”

A few moments in the movie differ from the book, especially when it comes to the ending. Ausiello tells TIME that that decision really came down to timing. At the end of the book, Ausiello writes about going back to Millersburg, Pa., where Kit’s parents lived, for Kit’s local memorial reception. Kit’s parents chartered the ferry he loved to take, and from which Ausiello scattered Kit’s ashes into the Susquehanna River. He then took Kit’s wedding band from his pocket and took his own off, thanked Kit, and threw them in the river. 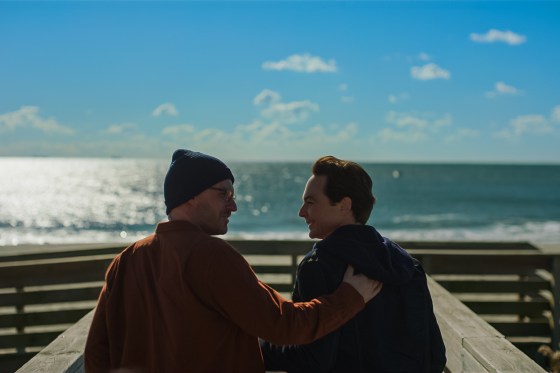 In the movie’s ending, however, audiences see Michael grieving Kit and getting in a cab to make his way to Los Angeles. “It would have been wonderful if [the Millersburg scene] was in there,” Ausiello tells TIME. “But to me, what was important about that was that Michael have a moment with [Kit’s mother] Marilyn because after Kit dies, they have a very special relationship, and I’m glad we did that.”

Though the movie changes the ending somewhat, it does add a new scene that is among the most heartbreaking in the film. The moment after Kit passes away, the scene turns into a dream sequence as if it were a film set and Kit were the star of the project. Michael goes into journalist mode and begins asking him prophetic questions about life, seemingly the questions he wanted to ask Kit before he died. “That was part of David and Dan’s initial pitch for the movie, and that’s what pretty much sold everyone on it,” Ausiello explains. “They had this cinematic idea to take the story and frame it through Michael’s obsession with television, and that was one of the things that got everybody excited about their pitch.” 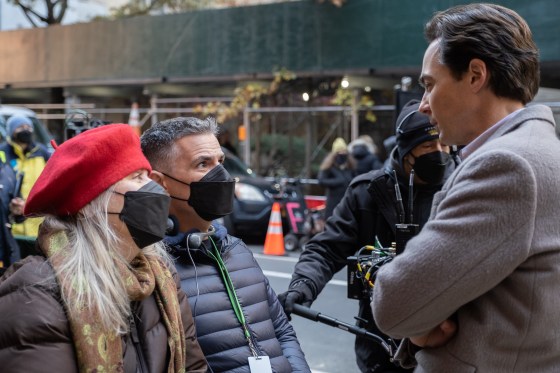 When asked if the movie-making experience was challenging or therapeutic, Ausiello responded that it “wasn’t difficult because it’s not really my life,” he says. “It’s a movie version of my life, and I was always aware of that. I was on set every day, and even while I was watching the scenes being shot, I was moved by them because the performances were so good.”

Ausiello says he doesn’t want to impose any of his hopes and feelings on moviegoers. He just wants them to go into the movie with as open a mind as possible. But he wants to ensure that people know two of the most important things to him when making the film. First, it was crucial to show how Kit’s parents showed up for their son when he was sick. The second is that Kit was not a victim. Ausiello says, “I had no interest in doing a movie where he was portrayed as such.”

And while we all think about who might play ourselves in a movie, casting a lost loved one is a weightier decision. When it came to casting an actor to portray Kit, Ausiello says he took a bit of a “leap of faith” with signing off on Aldrige because he wasn’t very familiar with his work outside of Fleabag. “But once I saw him on set and seeing him embody this role,” Ausiello says, “I knew very early on that Kit was in good hands.”