China’s economy is expected to have slowed sharply in the fourth quarter due to stringent COVID curbs, dragging down 2022 growth to one of its worst in nearly half a century and raising pressure on policymakers to unveil more stimulus this year.

Data on Tuesday is forecast to show gross domestic product (GDP) grew 1.8% in October-December from a year earlier, halving from the third-quarter’s 3.9% pace, according to a Reuters poll. Such an outcome would still exceed the second quarter’s 0.4% rate of expansion.

On a quarterly basis, GDP is projected to contract 0.8% in the fourth quarter, compared with growth of 3.9% in July-September.

“The Chinese economy appears to have ended the year on a weak tone,” economists at JPMorgan said in a research note.

“As suggested by the weak December NBS PMI report, domestic activity likely slowed further by year-end as rapid relaxation of control measures led to a sharp spike in COVID-19 cases.”

Beijing last month abruptly lifted its strict anti-virus measures that had severely restrained economic activity in 2022, but the relaxation has also led to a sharp rise in COVID cases that economists say might hamper near term growth.

Factory output is forecast to inch up 0.2% in December from a year earlier, slowing from a 2.2% rise in November, while retail sales, a key gauge of consumption, is seen shrinking 8.6% last month, extending November’s 5.9% drop.

For 2022, GDP likely expanded 2.8%, badly missing the official target of “around” 5.5% and braking sharply from 8.4% growth in 2021. Excluding the 2.2% expansion after the initial COVID hit in 2020, it would be the worst showing since 1976 – the final year of the decade-long Cultural Revolution that wrecked the economy.

Growth is likely to rebound to 4.9% in 2023, as Chinese leaders move to tackle some key drags on growth – the “zero-COVID” policy and a severe property sector downturn, according to the poll. Most economists expect growth to pick up from the second quarter.

The government is due to release the GDP data, along with December activity indicators, on Tuesday at 0200 GMT.

Beijing’s abrupt lifting of COVID curbs last month has prompted analysts’ upgrades of its economic outlook and a jump in Chinese financial markets, but businesses have struggled with surging infections, suggesting a bumpy recovery in the near term.

Economists at Morgan Stanley expect an earlier and stronger growth recovery from the first quarter, lifting 2023 GDP growth to 5.7%.

“We believe the market is still under-appreciating the far-reaching ramifications of reopening and the possibility that a decent cyclical recovery can occur despite lingering structural headwinds,” they said in a note.

Chinese leaders have pledged to prioritise consumption expansion to support domestic demand this year, at a time when local exporters struggle in the wake of global recession risks.

At an agenda-setting meeting in December, top leaders pledged to focus on stabilising the economy in 2023 and step up policy support to ensure key targets are hit.

China is likely to aim for economic growth of at least 5% in 2023 to keep a lid on unemployment, policy sources said.

The central bank is expected to steadily ease policy this year, pumping out more liquidity and lowering funding costs for businesses, while local governments are likely to issue more debt to fund infrastructure projects. 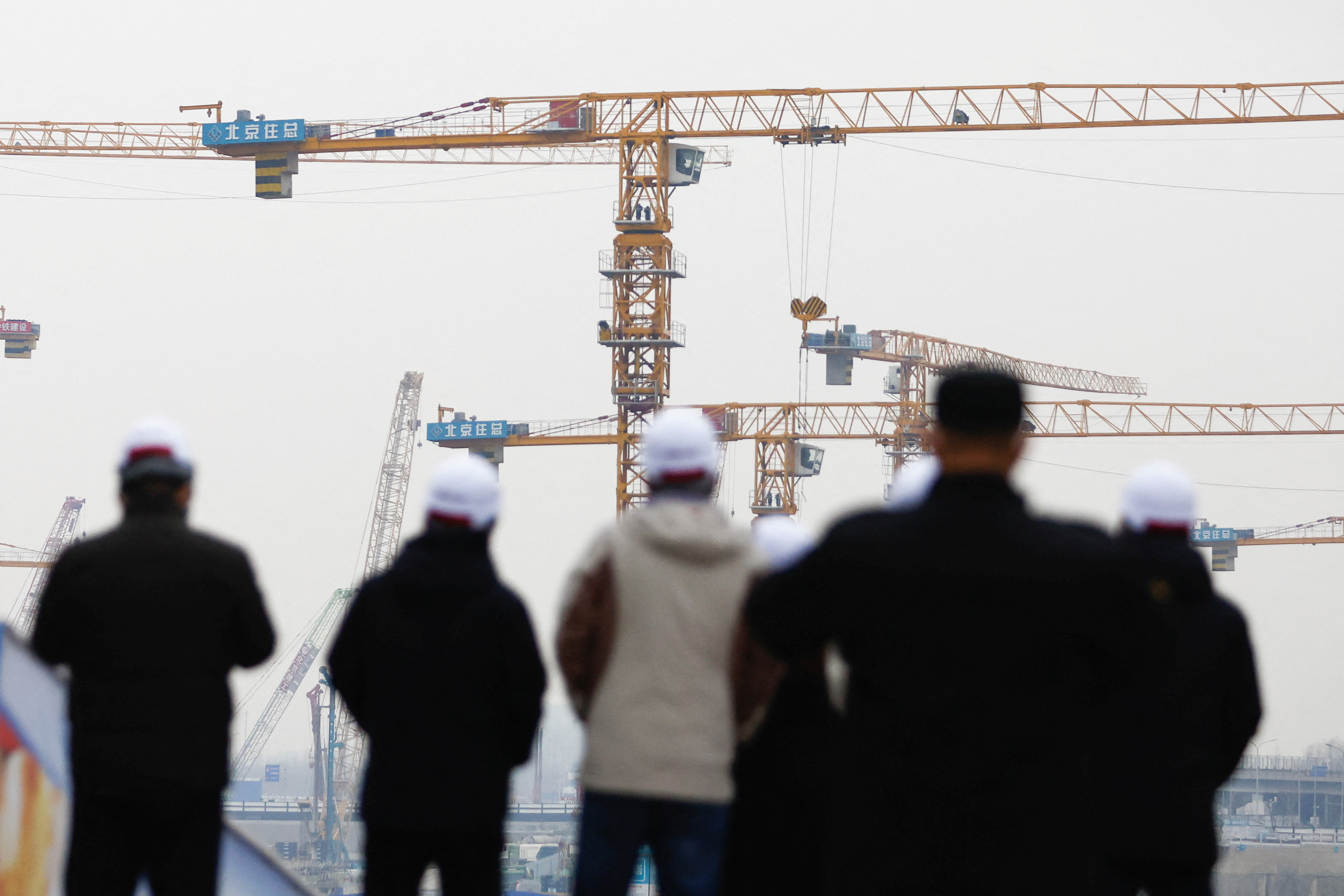 People look on near cranes standing at a construction site in Beijing, China January 12, 2023. REUTERS/Tingshu Wang 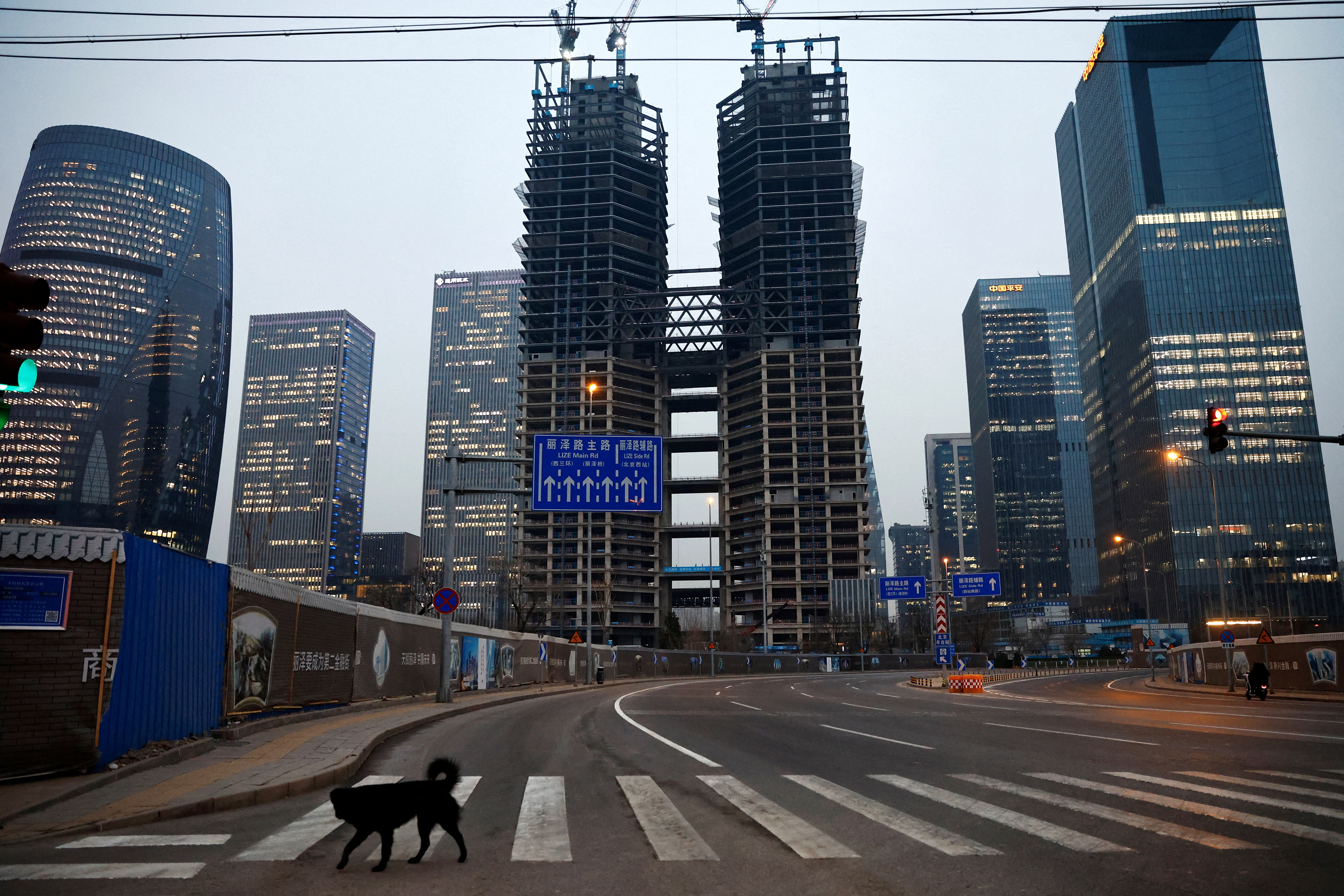 A dog crosses a road at a financial district with buildings under construction, in Beijing, China January 11, 2023. REUTERS/Tingshu Wang