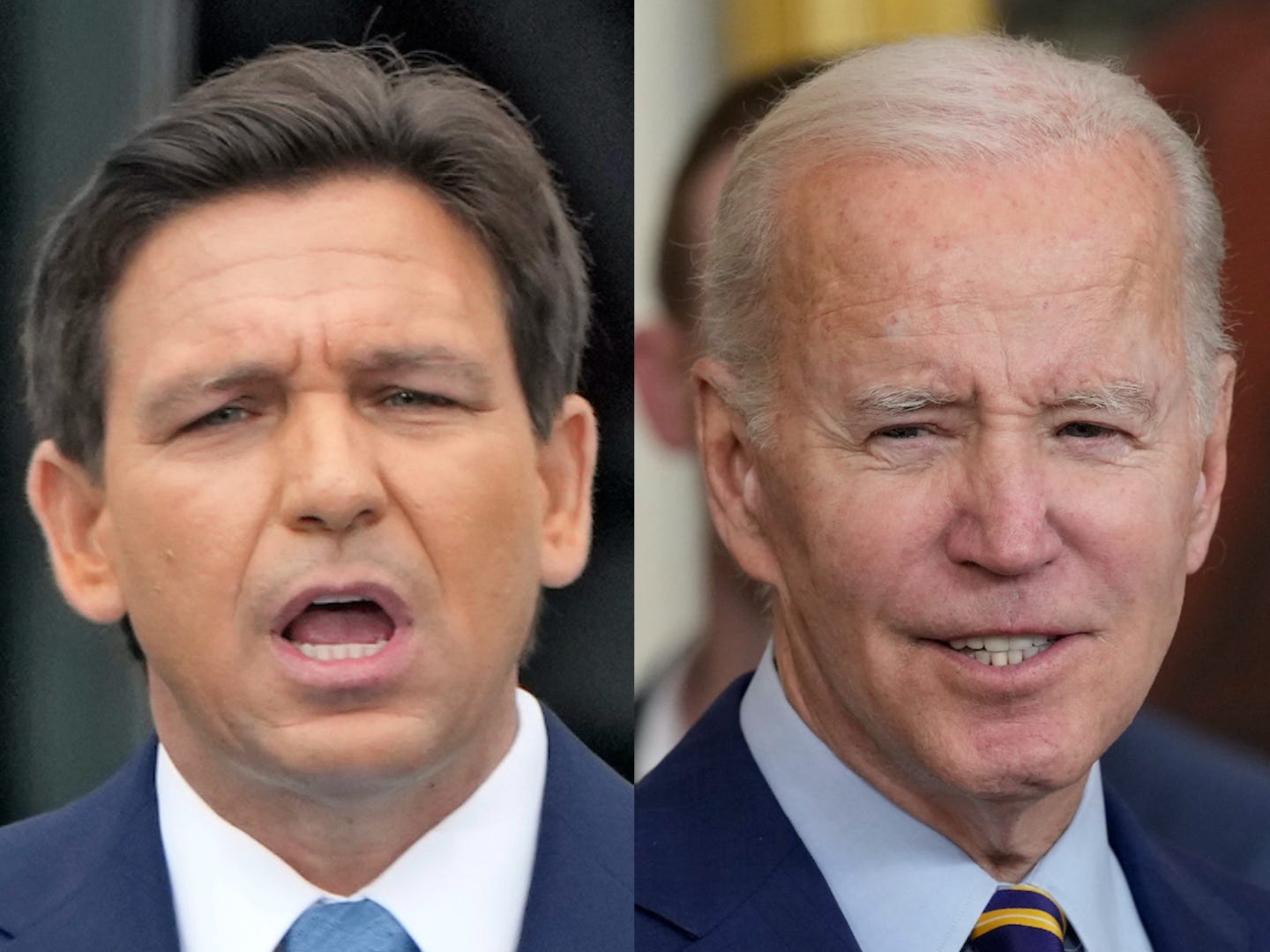 Republican Gov. Ron DeSantis of Florida came close to defending former President Donald Trump on Wednesday, when he accused the Biden administration of having a double standard on classified documents.

The governor was weighing in on the story dominating headlines for the last week, which has slowly revealed that President Joe Biden held classified documents at his post-vice presidential office and home. Trump, meanwhile, kept hundreds of classified documents at Mar-a-Lago in Palm Beach, Florida. The latest Biden situation has posed a political headache for the White House.

“What’s good for the goose is good for the gander,” DeSantis said in response to a reporter’s question about the documents. “You can’t have two different sets of rules based on your political party.”

The governor also noted a CBS “60 Minutes” interview Biden conducted in September, in which the president called his predecessor “irresponsible” after a staged photo from the Justice Department showed folders of the document Trump held at Mar-a-Lago, clearly labeled “top secret.”

“He said that it was incredibly reckless to have classified — he said all this stuff on ’60 Minutes,'” DeSantis said about Biden. “Now you find out he had them stashed behind his Corvette at his house that Hunter had access to, which is definitely a security risk in my book.”

The governor, who was speaking in Daytona Beach Shores, Florida, was raising an attack line similar to many Republicans in Congress, who say that Biden’s son, Hunter, could have accessed the classified documents.

“It just shows you what some of these folks do,” DeSantis said. “They had all this stuff to say, and now they are acting like it’s not a big deal.”

DeSantis, who frequently attacks Biden, did not say “Trump” by name, but it was clear from the context that he was comparing the two situations.

It’s possible DeSantis and Trump will face off for the GOP White House nomination in 2024 to go up against Biden, though Trump is the only one who has made a run official. Trump, 76, who endorsed DeSantis in 2018, has attacked the governor for dodging questions about the 2024 nomination contest, and nicknamed him “Ron DeSanctimonious.”

DeSantis, 44, has not responded directly to the attacks, even when prodded by the press, though he has been differentiating himself on policy and touting his record win in Florida on Election Day — when many national Republicans Trump backed performed poorly.

The White House did not immediately respond to Insider’s inquiry seeking a response to the governor’s comments.

Based on the limited information the White House has released so far, the investigations into Trump and Biden’s mishandling of documents have notable differences, though improperly handling such documents is considered a serious matter that’s potentially damaging to national security.

According to court records, Trump resisted turning over hundreds of documents, which led to a subpoena, and then to the FBI raiding Mar-a-Lago to recover them. In contrast, Biden’s team has said that aides immediately called the National Archives when they discovered the documents.

Trump previously downplayed his keeping of documents, saying that other former presidents such as Barack Obama had done the same. The National Archives disputed Trump’s claims, countering that Obama sent the documents to a federal government center, sorted through them, then sent some materials to Obama’s presidential library.

The defense of each case has also varied depending on political party.

When more information came out about top-secret documents Trump held at Mar-a-Lago, many congressional Republicans were caught flat-footed over how to respond as details of the FBI’s search of Mar-a-Lago unfolded.

Some downplayed the investigation while others accused Biden of weaponizing the Justice Department and  rallied around the former president.