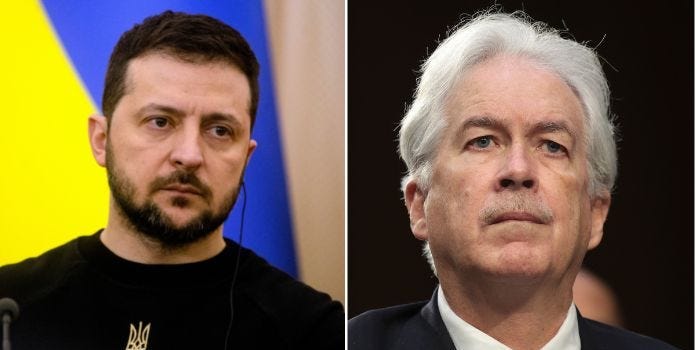 During a secret meeting in Kyiv with CIA Director William Burns earlier this month, Ukrainian President Volodymyr Zelenskyy was especially focused on the prospect of future US assistance in the ongoing war effort and whether or not Republican lawmakers in the House will continue to provide spending, according to The Washington Post.

Anonymous sources told the outlet that Burns traveled to the Ukrainian capital at the end of last week to meet with Zelenskyy and discuss the agency’s forecast of Russia’s imminent military plans. The visit comes nearly one year after Russia launched an unprovoked war in Ukraine in February 2022.

Burns’ trip coincides with mounting casualties on both sides as a Russian assault in the east has forced Ukraine to respond while it simultaneously tried to conserve weapons and bodies for a future counteroffensive.

During the Kyiv meeting last week, Zelenskyy and his senior intelligence officials were most concerned about ongoing US aid, sources told The Post, asking Burns how long Ukraine could expect the assistance to continue in the aftermath of Republicans taking control of the House and diminishing support for the war among the US electorate.

Burns reportedly responded by acknowledging that additional aid will likely become harder to obtain in the future, according to the newspaper, while still emphasizing the weight of the current fight on the battlefield.

Neither the CIA nor the State Department immediately responded to Insider’s request for comment.

Despite the uncertain nature of ongoing assistance, Zelenskyy left his meeting with Burns assured that the Biden administration remains supportive of Ukraine’s plight, The Post reported, citing people familiar with the gathering.

The $45 billion aid package that Congress approved for Ukraine in December is expected to last through July or August, Zelenskyy said, according to the outlet, but questions remain around whether Congress would consider passing another such package.

Many Republican lawmakers have rallied for less spending toward the foreign war, and the party took control of the House of Representatives earlier this month.

CIA Director Burns has forged a reliable relationship with Zelenskyy in the 11 months since war broke out, secretly visiting the country in October, where he shared intelligence with Ukrainian officials in a show of US support for the country.

Burns also met with Zelenskyy in secret right before the Russian invasion last year, sharing important intelligence that indicated the Russians were plotting to assassinate the Ukrainian president, Chris Whipple reported in his forthcoming book, “The Fight of His Life: Inside Joe Biden’s White House.”