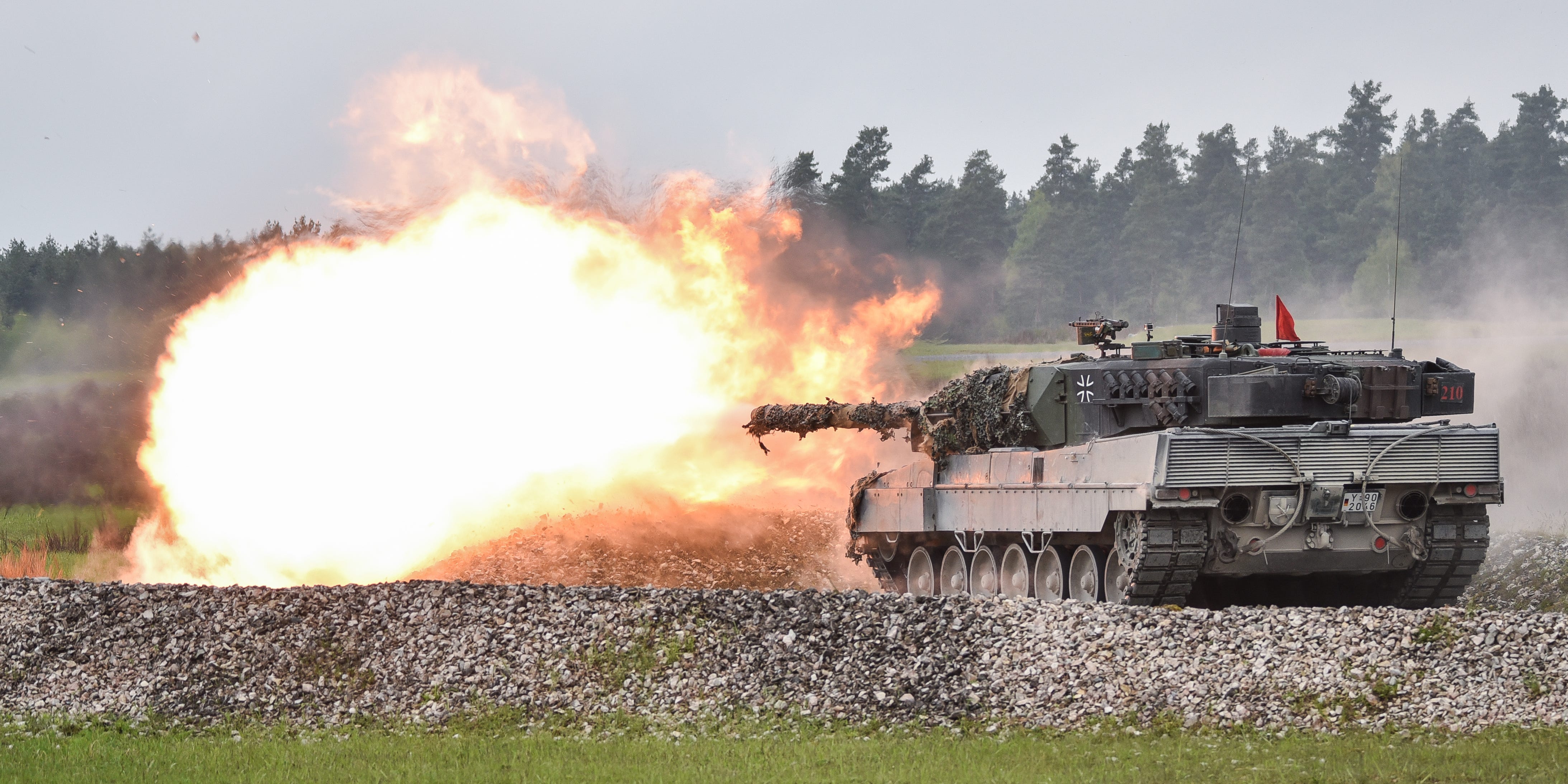 A German Leopard 2A6 tank fires at its target during the Strong Europe Tank Challenge (SETC), at the 7th Army Training Command Grafenwoehr Training Area, Germany, May 12, 2017.

Kyiv has pressed NATO and other European partners for more heavy armor, including fighting vehicles and tanks. A lot is on the way, but a couple of requests have hit roadblocks.

Ukraine is getting many of the items on its wish list, but it hasn’t been able to get its hands on the German-made Leopard tanks it wants. And for the time being, that doesn’t seem likely to change.

Some countries with Leopards have offered to send these tanks, but the problem is that sending them technically requires Germany’s approval. And despite mounting pressure on Berlin to provide its own Leopards or at the very least allow others to send them, German Chancellor Olaf Scholz has not budged.

Poland, one NATO country that has Leopards, indicated on Thursday that it could go rogue and take matters into its own hands if Germany didn’t authorize anything. The country’s president previously said he wanted to send the tanks to Ukraine as part of an “international coalition.”

US Defense Secretary Lloyd Austin said Friday after a meeting with the Ukraine Defense Contact Group that Germany had not reached a decision on the Leopards. He emphasized though that the focus “is making sure that Ukraine has the capability that it needs to be successful right now.”

He added that he has “no announcements” on the American M1 Abrams tank, another much-sought-after weapon. A German official previously linked the delivery of the Abrams to a decision on the Leopards, but Austin said that is not the case.

German Defense Minister Boris Pistorius, who attended the defense ministers meeting Friday, dashed Ukrainian hopes of receiving Leopards, saying that “we all cannot say today when a decision will come and what it will look like,” according to Politico.

On a brighter note though, he said that he had instructed the German military to review its inventory of Leopard battle tanks so it can “act quickly” if a decision is eventually reached.

The Leopard 2 is Germany’s main battle tank developed by defense firm Krauss-Maffei Wegmann. It was designed in the 1970s, succeeding the earlier Leopard 1, and can be found in the arsenals of nearly 20 different countries.

The Leopard can travel up to 44 mph out to a range of 275 miles. It is armed with a 120 mm smoothbore cannon, a 7.62 mm machine gun, and automatic grenade launchers. Additionally, the tank has ballistic and mine protections, and it’s seen operational experience in Kosovo, Syria, and Afghanistan. 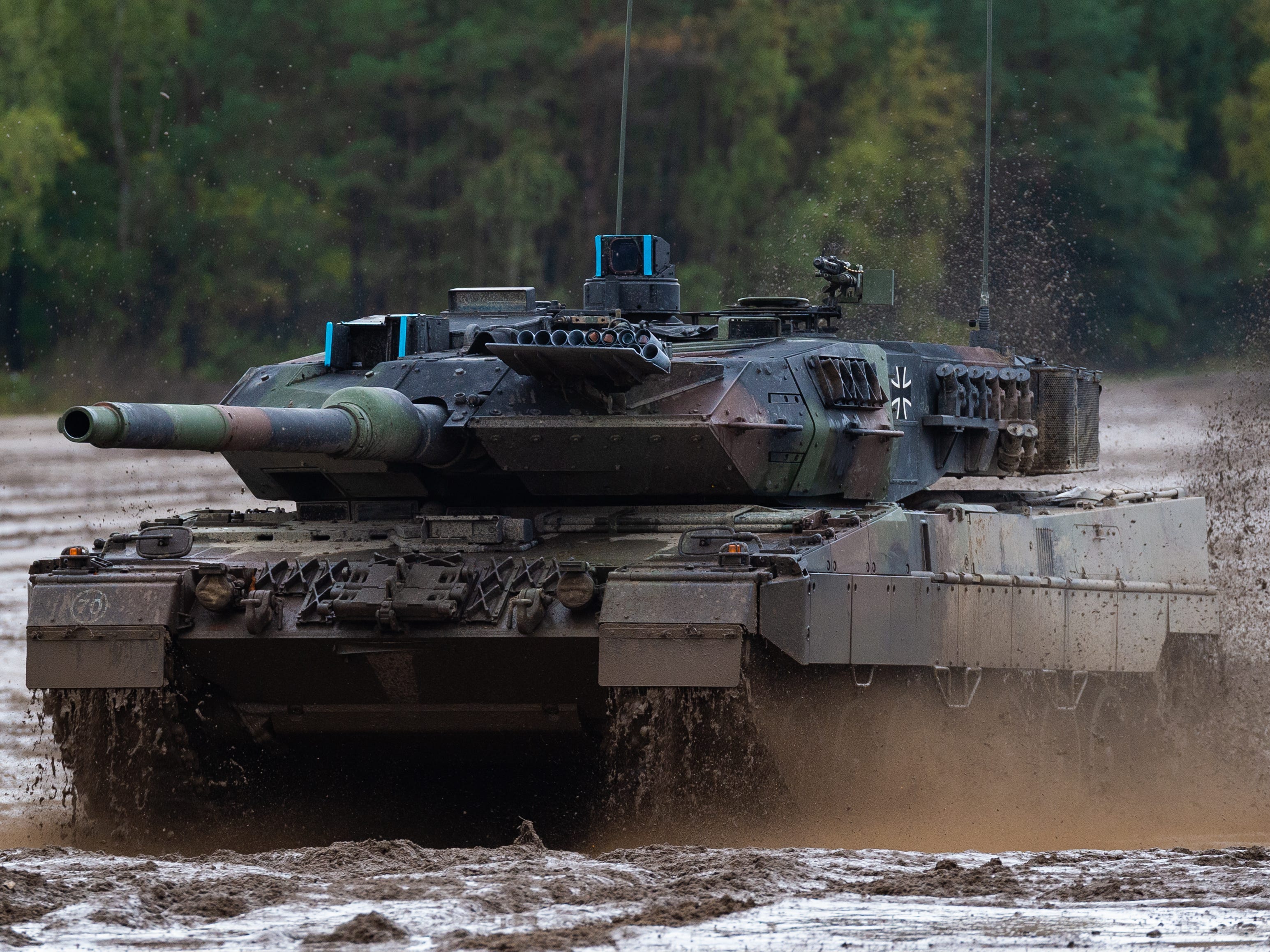 “Thanks to its high power output, the [Leopard 2] moves with great speed even on rough terrain,” Krauss-Maffei Wegmann, the manufacturer, notes on its website. “Its maneuverability, proven fire power and high degree of protection enable it to complete the most demanding of missions.”

Deputy Pentagon Press Secretary Sabrina Singh told reporters at a Thursday briefing that unlike the American M1 Abrams, which has a different kind of engine, the Leopard requires diesel fuel and is a “little bit easier to maintain.”

“They can maneuver across large portions of territory before they need to refuel,” she said of Leopard and British Challenger tanks.

Gen. Mark Milley, chairman of the Joint Chiefs of Staff, told reporters on Friday that the 11-month-long war is currently a “very, very difficult fight,” going on to say that the front line is currently “static” — with the exception of the battles around the eastern Ukrainian city of Bakhmut.

Jeffrey Edmonds, a Russia expert at the Center for Naval Analyses and former CIA military analyst, said he doesn’t believe that the Ukrainians want the battlefield to remain in such a static situation, although the Russians might like that so they could regroup and integrate new soldiers.

“I think the Ukrainians want to, at some point, launch counteroffensives. And that’s much more effective with heavy armor — as much as you can get,” Edmonds told Insider. “Especially modern systems, which probably have more penetrating power.” A Leopard 2A6 main battle tank of the Bundeswehr, the German armed forces, participates in the NATO Iron Wolf military exercises on October 26, 2022 in Pabrade, Lithuania.

Main battle tanks like the Leopards — along with infantry fighting vehicles — give Ukraine more opportunities to change the “static nature” of the conflict and take advantage of potential breakthroughs, Edmonds said, adding that they provide firepower, maneuverability, and “shock effect.”

If Leopard tanks make their way to Ukraine, they would join a squadron of UK-provided Challenger 2 tanks and other types of armored combat vehicles that NATO and European countries have recently pledged to send to Kyiv. The US alone is sending scores of Bradley infantry fighting vehicles and Stryker armored personnel carriers.

As Western security assistance to Ukraine continues to ramp up in the early weeks of the new year — and ahead of the one-year anniversary of Russia’s full-scale invasion — it remains to be seen how European countries proceed with the Leopard question, but pressure to get these tanks to Ukraine is growing.

“Arming Ukraine in order to repel the Russian aggression is not some kind of decision-making exercise. Ukrainian blood is shed for real,” Poland’s Minister of Foreign Affairs Zbigniew Rau said on Friday. “This is the price of hesitation over Leopard deliveries. We need action, now.”