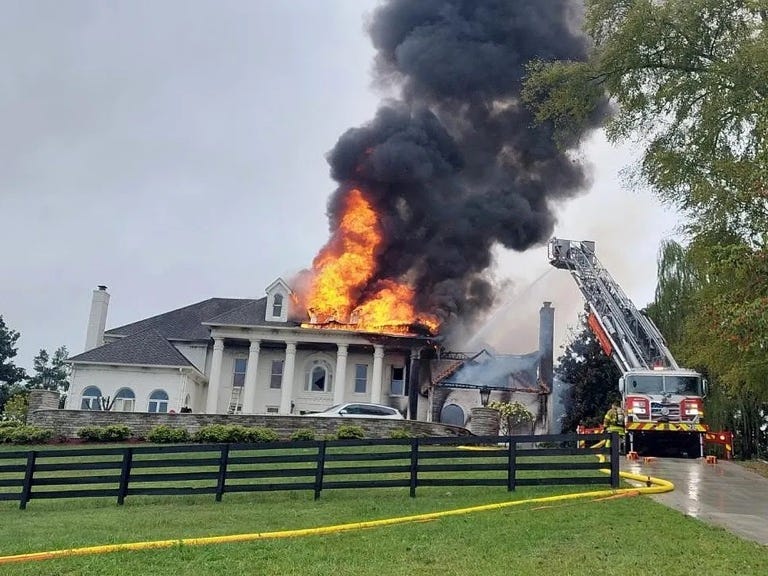 A Franklin, Tenn. mansion on fire

Real estate listings can be filled with secrets and hidden details, but Zillow posts as “transparent” as a recent one for a Tennessee home are unusual.

The $1.5 million mansion, built in 1997 in Franklin, Tenn., was significantly damaged when a fire broke out in September 2022, according to WKRN. The home was reportedly in the midst of final renovations before the owner moved in, according to WSMV.

A fire-damaged room inside the mansion.

The 4.88-acre property, which includes a guest house left undamaged by the fire, could be a space to “build any home of your dreams,” the listing says. It includes photos from before the fire, as well as several of the house during the blaze and the aftermath.

“Using that picture, we wanted to be transparent about the history of the home, and we wanted to show how grand the home was and how grand it could be again if they chose to rebuild,” Paula Duvall, the listed agent, told WKRN.

The exterior of the home after the fire, with significant damage to the roof.

During construction on the home in September, an explosion led to a fire that spread to the roof, which caved in and caused significant damage to several rooms, according to WKRN.

The listing says the home has a pending offer, and has been viewed more than 220,000 times in its four days on the website.

A tweet sharing the listing on Zillow Gone Wild, a popular Twitter account documenting obscure homes on the site, received more than 1 million views, and hundreds of likes and retweets since it was posted Thursday.

A severely damaged portion of the home.

Home » Audio Sources - Full Text Articles » ‘Wanted to be transparent’: A Tennessee mansion is listed on Zillow for .5 million – and photos show a fire-ravaged property
a
Advertisements